Claus for concern: the many accidents waiting to happen at Christmas 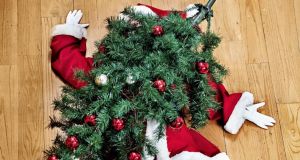 Every year in the UK about 1,000 people are injured by Christmas trees, usually while fixing stars, lights or other decorations to the higher branches. Photograph: iStock

In a hotel lobby, one chap says to another, “My rook to queen’s bishop was inspired.” His chum replies, “Surpassed only by my Sicilian defence.” Yes, the sound of chess nuts boasting by an open foyer means that Christmas is coming. Apart from being a happy family occasion – “Whaddaya mean your mother’s staying till New Year’s Day?” – celebrating Christmas involves both food preparation at high temperatures and the draping of lights from heights.

These and other activities, when combined with excessive alcohol consumption, mean that festive roistering is not without risk. For example, a report in the journal Alcoholism and Drug Abuse Weekly, quoting an emergency department consultant at Southampton University Hospitals NHS Trust, implies that preparing Christmas dinner is freighted with more risk than Bambi grazing in a knacker’s yard, what with “… multiple injuries related to wielding sharp carving knives while intoxicated, champagne corks hitting guests in the eyes, and oven burns when drinking precedes the meal”. This impression is confirmed by plastic surgeon Mr Cormac Joyce – specialist registrar at St James’s Hospital in Dublin – who told The Irish Times: “I once had to remove an impaled carving knife from a woman’s hand on Christmas Eve after she attempted to separate frozen Brussels sprouts with it.”

But away from the kitchen, Joyce says that there will always be a few casualties associated with that long-established institution, the office Christmas party. “Thankfully, these injuries are often relatively minor and typically involve intoxicated revellers falling on to bottles or pint glasses, and they often require plastic surgery to their face or upper limb to explore the wounds and remove the glass pieces.”

Once the music starts, however, those expressing themselves through the medium of dance should be careful, as the title of a paper in the European Journal of Emergency Medicine suggests. In “An uncommon cause of headache after headbanging at a party”, Belgian medics describe how a 15-year-old male turned up at his local emergency department with a severe headache. He reported that he’d been at a party where he’d spent a long time headbanging to music. This resulted in a subdural haematoma, from which he recovered. The teenager was lucky because the report authors state: “Other hazards of headbanging include vertebral artery aneurysm [and] carotid artery dissection, owing to the violent head and neck motion.”

Sometimes, however, office party escapees opt to go on a pub crawl, and may also end up paying unscheduled visits to accident and emergency departments. “Unfortunately,” says Joyce, “in recent years, with the growing popularity of the so-called 12 pubs of Christmas, alcohol-fuelled injuries are more common than ever and account for an increasing number of referrals to plastic surgery units throughout the country.”

But alcohol is not the only factor associated with festive injuries. “I once spent several hours one St Stephen’s Day removing glass from the feet of two young brothers who inadvertently trampled on Christmas tree decorations as they raced to open their presents,” recalls Joyce, “And last year, medics from Dublin’s James Connolly Memorial Hospital reported in the Irish Journal of Medical Science that over the Advent period (December 1st to Christmas Day) their trauma department received three patients with severe lower limb injuries acquired while decorating Christmas trees, with one sustaining an open fracture. The authors said that every year in the UK about 1000 people are injured by Christmas trees, “usually while fixing stars, lights or other decorations to the higher branches”.

And when researchers from the ophthalmology department of the Norfolk and Norwich University Hospital investigated Christmas-related eye injuries, they estimated that about 144 significant injuries occur annually in the UK. The four cases they described comprised a 27-year-old male who was trying to blow up a six-foot long balloon when it burst, leaving him with blurred vision nine months later; a 57-year-old female who yanked at the plastic tag on her Christmas present, causing it to snap and ping her in the eye; a 50-year-old male who was poked in the eye by a branch of the Christmas tree he was uprooting; and a 52-year-old female who was similarly jabbed by a Christmas tree branch, and whose vision returned to normal after a month of treatment.

While decorating an indoor Christmas tree is rich with lethal potential, the risk factor rockets like a champagne cork when celebrants venture on to slippery rooftops, ladders and railings to drape lengthy coils of fairy lights in an attempt to impress Santa … or perhaps the neighbours. In a Canadian study, published this year in the journal Injury, researchers reviewed patients admitted to a trauma centre between 2002 and 2012 “with severe injuries caused during Christmas-light installation.” Forty patients were severely injured – neurological (68 per cent), thoracic (68 per cent), spinal (43 per cent), extremity (40 per cent) – with 65 per cent falling from ladders and 30 per cent from rooftops. There was a mortality of 5 per cent and 12.5 per cent of patients needed long-term care or rehabilitation.

So what better way to anticipate the imminent joy of Christmas than with a rendition of a verse from A Christmas Carol (1959) by Tom Lehrer:

“Kill the turkeys, ducks and chickens, mix the punch, drag out the Dickens,

Even though the prospect sickens – Brother, here we go again.”