Children with Down syndrome: mother tells of her experience 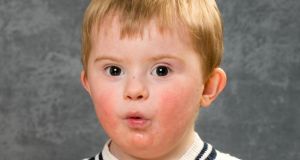 Simon Smyth: a little boy with a big personality.

On May 19th, 2013, our lives changed forever with the arrival of our first child, our beautiful son Simon whohad been prenatally diagnosed with Down syndrome 10 days previously. We were plunged into the unexpected – this wasn’t the plan. Consumed with grief, fear and worry, I was very unsure of what the future would hold for me as his mother and the challenges we would face as a family.

Previous to Simon’s birth I had little knowledge of the difficulties people with Down syndrome and their families experience. Issues such as low muscle tone which can cause feeding problems and delay reaching gross motor milestones, such as walking; hearing difficulties; and speech delay. I was unaware of the ongoing need for speech therapy, physiotherapy, occupational therapy and the many medical appointments needed to address medical issues that are common for people with Down syndrome. These can include heart defects, thyroid problems, sleep apnoea, eye sight problems and more.

I didn’t know of the struggle parents face to access an adequate amount of these therapies through their early intervention services, an area which is greatly under resourced. I was not aware of the financial pressures that are on parents to supplement the therapies privately.

However, neither did I realise how rewarding it would be to parent a child with Down syndrome and how, despite the difficulties, those initial feelings of loss, fear and anxiety would become less and less as time went by.

I was determined from the beginning to do all I could to help Simon reach his full potential and to prove that, with the help of early intervention, people with Down syndrome are as unique and diverse as the rest of society.

Simon is a little boy with a big personality. He is determined and mischievous and our hearts burst with pride as he reaches his milestones.

When Simon sat up, took his first step, and used his first Lámh sign, there was almost a family celebration.

Simon brings more joy and happiness to our family than anyone could ever imagine. He has taught me more in his three years of life than I have learned in the 30 years previous. Through Simon, life-long friendships have been formed and he has opened up a whole new world for me.

This is why I now consider it a privilege to be his mum and equally a privilege for us to be taking part in the Down Syndrome Centre’s 21 Faces campaign.

The campaign aims to challenge the misconceptions about Down syndrome and to create more understanding; the understanding I didn’t have before Simon was born.

Together with our family and friends, the Down Syndrome Centre has been a fantastic support to us since Simon’s arrival, a home from home to connect with other families in our situation and a place to access some of these essential therapies that Simon and so many other children need to thrive.

As part of the campaign, the centre will follow and record the development and progress of the children featured over the next number of years.

The campaign also include testimonials from the “champions” who support the children – parents, siblings, grandparents, friends and practitioners. Dublin Bus has supported the campaign by displaying 500 posters on its buses and more posters are visible around Dublin city.

Find out more about the campaign and the Down Syndrome Centre at downsyndromecentre.ie