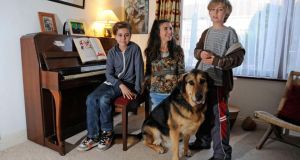 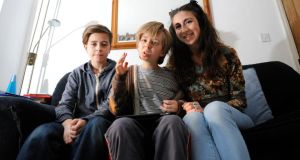 It’s time to get Caoimh, my intensely autistic nine-year-old son, to bed. He runs around hyperactively, screeching and shouting. (Severe verbal dyspraxia means that the few spoken words he has are unintelligible to most people.) He rushes at his 12-year-old brother, Fiach, and slaps him hard on the back. I tell Fiach to run upstairs and lock himself into his bedroom.

Furious, Caoimh chases Fiach up the stairs and kicks his locked door. His screams are nerve-shredding. I don’t want to give him more painkillers – he’s had two doses already today – but I don’t know what else to do. I give him melatonin as well, to help bring on sleep. He throws himself onto his back and thrashes. I cushion his head to prevent him banging it off the floor.

He pinches his thighs and stomach, hard. His legs and torso are covered in at least a hundred self-inflicted bruises.

Tooth-brushing and toileting requests incite defiant opposition. Frantic, he grabs me and pulls me to the ground. When I stand up, he runs at and pushes me, and I narrowly avoid falling down the stairs.

At this point I make the decision that the safest thing to do is to drag him along the floor, kicking and screaming, and lock him into his bedroom.

Caoimh rages in his room, beating the door, roaring and crying. I go to Fiach to comfort him. Eventually Caoimh becomes exhausted. His shouts reduce to whimpers. I unlock his door and coax him into bed.

He weeps and signs to me that he needs to be hugged. I lie down beside him, holding him as he cries, until finally, close to midnight, he falls asleep.

I’m awoken at 5.30am by the sound of Caoimh moaning. Before he’s had breakfast, before the first dose of painkiller has kicked in, he’s banged his hands many times off the sharp edges of the table, and stamped his legs hard into the floor, over and over again. He’s so agitated he can barely sit down, unless distracted by a DVD. This behaviour continues in Caoimh’s special school, where they have a “pinching” scale of one to five. One indicates “pulling at clothes”, while five is “causes bruising to himself and others”.

We’ve been coping with this horror on and off, but increasingly on, for two years. Needless to say, Caoimh’s learning has plateaued. A string of professionals – including GPs, a paediatrician, a paediatric neurologist, a dietitian, a psychologist and behaviour analysts – have been unable to help.

Some of them don’t seem to believe me when I say that Caoimh is in pain. Some of them attribute Caoimh’s increasing self-injury, aggression and poor sleeping to the progress of his “autism”.


Radical improvement
These problems peaked in the summer of 2013. Now, in the spring of 2014, Caoimh’s behaviour, mood and wellbeing have radically improved.

The journey of knowledge-acquisition that I began when I attended an international conference in Edinburgh last year called Changing the Course of Autism , has led me to finding professionals in Ireland who are educated in the biochemistry of ASD and its underlying “comorbidities” (one or more additional disorders or diseases which co-occur with the primary disorder). And through reading and research, I am becoming a lay expert.

What I was told eight years ago at diagnosis – that autism is an inborn genetic disorder – has been debunked by scientific research over the past couple of years.

Genetic disorders don’t explode in prevalence the way autism has done, with the US Centre for Disease Control now stating that one in 88 children will become autistic.

We’re on the cusp of a massive paradigm shift, which understands autism to be the result of a complex intermeshing of degenerative diseases and comorbidities, largely created and exacerbated by environmental factors.

While this new, scientifically backed understanding of autism has shocking implications, it is also an immense source of hope. Underlying comorbidities can be investigated, diagnosed and treated.

Harmful environmental exposures can be reduced. Children with autism who are being tested and treated for biomedical problems are improving and even fully recovering.

With the help of Dr Goodwin McDonnell, a Dublin GP who is also a homeopath and an osteopath, Caoimh was diagnosed with gastrointestinal disease, including permeable gut, bacterial dysbiosis and candida infection. He had aluminium toxicity. He was severely deficient in zinc, vitamin C and serotonin.

As treatment, Caoimh’s father, his step-mother and I began the Gaps grain-free, sugar-free, lactose-free, organic-only diet, developed by neurologist/ nutritional scientist, Dr Natasha Campbell-McBride, and described in her book, Gut and Psychology Syndrome .

McBride is particularly condemnatory of fluoride, a known neurotoxin, and cutting out Caoimh’s exposure to dangerous contaminants in Irish tap water via reverse osmosis filtration was the crucial first step on his healing path.

Five months into the two-year Gaps dietary programme, painkillers are now a thing of the past. Caoimh loves going to bed, falls asleep easily and generally sleeps for 10 hours.

He is able to breathe through his nose at night, and his stomach, which was distended for years, has flattened. He is calm and happy, often to the point of serenity. He looks much healthier. His temper rarely flares and, when it does, he knows how to get it under control.

He has lost his self-injurious, aggressive and hyperactive behaviours. His ability to concentrate has increased dramatically. His comprehension of speech and his ability to follow instruction have leapt ahead.

His vocal articulation and clarity are improving. He is learning piano, drumming and art.

For the first time in our lives, we can sit down with him and enjoy picture books together. He is learning to read.

The new science shows that when medically assessed, the majority of autistic people test positive across a wide range of comorbid medical conditions, many of which are progressive if left undiagnosed and untreated.


Genetic ‘myth’ of autism
These conditions affect mood, sleep, communication, social interaction, cognitive function and behaviour. Every parent and health practitioner dealing with autism needs to become aware of this.

Perpetuating the myth of autism as a primarily genetic disorder is a disservice to those who might benefit from treatment, and diverts attention from non-genetic causes.

It’s time to take autism beyond the boundaries of psychiatry and neurology, and recognise it as a whole-body disorder, with many of the common behaviours that have been attributed to ASD being surface manifestations of a systemic and complex disease process. When we do this, kids like Caoimh can begin to recover.


Adrienne Murphy will be joking about autism as one of the performers in Stand Up For Humanity! Activists do Stand -Up Comedy for Charity , which will be hosted by comedian Aidan Killian , at 8pm, Monday, March 24th , at the Whelans venue, in Wexford Street, Dublin .