Ask the expert: My 12-year-old boy has become angry overnight

If you have a parenting question, send your query to health@irishtimes.com 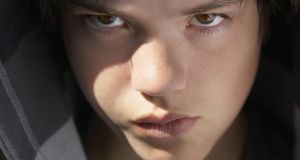 Increased levels of testosterone in boys can contribute to greater anger and aggression. Photograph: Thinkstock

Q In the past two months, my 12-year-old boy seems to have turned from a sweet and loving child who used to ask me if he could help me with anything into an aggressive and angry boy. He still looks like a little boy but his personality has changed completely. Everything is a problem for him; he won’t lift a finger to help and he provokes his younger brother and sister.

The final straw was when I tried to intervene in a physical fight with his brother and he pushed me hard against the wall. I went mad and refused to talk to him for a day until he apologised, which he finally did, but only because he wanted me to pay for his end-of-school trip, which I felt I couldn’t refuse. In the past I tried taking away the phone and computer (he is always glued to both of them), and he just said “Fine” and seemed willing to sit it out, so I ended up caving in.

He has lots of good friends he has known since Junior Infants, and he is out with them all day. I want him to be happy, but I just can’t make him understand how much his attitude and behaviour are affecting the rest of us. I know I should expect some change with his age but this seems so sudden and I’m worried that I might be missing something.

A It is not acceptable, under any circumstances, for your 12-year-old to be physically aggressive and intimidating and, while it’s important to find out the underlying cause for this change in behaviour, a plan also has to be put in place to ensure that it doesn’t happen again.

Given his age and stage of development, these behaviours might be part of the very wide “normal” spectrum of adolescence. However, any sudden change is a cause for concern and it will be important to make sure there is nothing else going on.

Adolescence brings a period of quite intense interacting physical, emotional, social and cognitive (thinking) changes. The release of hormones is responsible for the physical changes and, in boys, increased levels of testosterone can contribute to greater anger and aggression. You say your boy looks quite young, and maybe this is affecting his confidence and self-esteem.

Brain development can also, in part, explain typical adolescent behaviour. Research has shown that during this period the parts of the brain associated with impulsivity, novelty-seeking, emotionality and self-consciousness are in overdrive while the areas that direct self-control and rational thought are still under construction. It does all eventually reach an equilibrium but for the first few years the “out of sync” brain can lead to flashes of anger, intense emotions and reckless behaviour.

Sleep, or lack of sleep, is also a major issue in adolescents. Brain changes make them naturally want to go to bed later, but if he’s getting up early in the morning, or on a screen during the night, he may not be getting enough sleep.

With regard to exercise, you say he is with his friends all day, but what is he up to? Too little or too much exercise may affect his mood. Another issue to consider is the sometimes daunting prospect of the move to secondary school and the natural anxieties and worries that can come with this.

Online bullying can happen almost silently and it’s always worth checking out whether this is an issue. Even if it’s all very innocent, the constant flow of information and comments doesn’t allow the child any downtime, which can affect their mood. Adolescents do not generally have the self-control to impose their own boundaries on screen time, so parents should help with this.

The aim should always be to promote and reward positive behaviour rather than using sanctions, but you generally need something in your back pocket with a challenging teenager.

Set out clearly in advance what will happen if he hits his siblings or pushes you in future; a specific time-limited removal of screen time for 24 hours might be appropriate. If he argues, it goes up to 48 hours.

If he refuses to hand them over, stay calm and wait for an opportunity to take them for the agreed time. Hand them back only when the time is up. If there is a parent or partner available, make sure that they are completely on board as the best of plans can fall apart if you don’t have a united front.

Any changes should be set against a background of ongoing communication and keeping the “airwaves” open with your child. You may find that it’s a bit of a one-sided conversation at times, but make sure to listen and encourage them to talk.

Pick a calm moment to discuss events and see what’s going on for him. A motorway journey is always good for talking; they can’t escape, neither of you has to look at each other and you can turn the radio on if the conversation dries up.

There is possibly nothing sinister about this situation and it may simply be part of the normal spectrum of teenage years and adolescence. However, keep a general eye on mood and if you continue to be worried don’t be afraid to ask for professional help or advice through your GP.

John Sharry is away.