Are birth plans worth the paper they are written on? 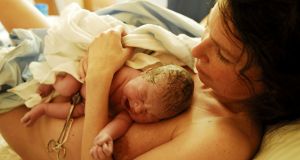 “For some reason, 21st-century women who are happy to stand up for their rights in the boardroom are still taking childbirth lying down.”

Twenty-one years ago this month, my birth plan went horribly wrong. Expecting my first child, I had read voraciously about labour and childbirth and decided I didn’t want my waters broken.

Neither did I want an oxytocin drip, aware it would speed up contractions and probably result in my having an epidural injection, episiotomy and instrumental delivery with a forceps or ventouse. This so-called “cascade of intervention” wasn’t what I wanted.

Alas, I ended up having my waters broken (leaving me in floods of tears), an oxytocin drip, an epidural – and wait for it – signing for an emergency Caesarean section. But, incredibly, on the operating table awaiting the surgical delivery of my baby, I asked the medical team if I could have “one more go”. They said yes and my baby daughter was born vaginally with the help of a vacuum cup.

In a recent poll of more than 2,000 women by the Positive Birth Movement, 42 per cent said their birth plan was not adhered to – and less than half said it was even read by professionals.

“For some reason, 21st-century women who are happy to stand up for their rights in the boardroom are still taking childbirth lying down,” says Hill.

She is calling for an overhaul of birth plans and urges expectant mothers not to think of their plan as a rigid wish list, but rather a way to make clear their choices in every eventuality – in other words, not just Plan A but B, C and D as well.

“A birth plan is a great chance for women and their partners to play an active role in their birth experience, learning about the many options available to them and deciding what they really want not just in their ideal birth but in every scenario, even an emergency Caesarean.”

A birth plan is set in stone, implying that this is the way things are going to go. But birth preferences are more adaptive

Krysia Lynch, chairwoman of the Association for Improvement in Maternity Services, prefers the term “birth preferences”. “A birth plan is set in stone, implying that this is the way things are going to go. But birth preferences are more adaptive.”

Lynch advises women to ask themselves a series of questions about what matters most and to look at the evidence around birth practices. “It’s as much about the conversation with healthcare providers as it is about what you write down,” she says.

Then, in pregnancy, a woman can choose what kind of antenatal classes she wants to attend if she wants active birthing, hypnobirthing or other ways of dealing with fear and pain in labour.

“That way, women will also be able to find out what’s hospital policy and what’s routinely done – for example, waters are routinely broken in many maternity hospitals – and decide if they want to learn about and prepare for other options.”

Electronic foetal monitoring is another routine practice in labour, which lacks evidence even in high-risk pregnancies. “It also keeps the woman in one place and takes the focus away from the woman and on to the machine,” says Paula Barry, a midwife in the Coombe Women and Infants’ University Hospital.

Barry also believes that writing down one’s birth preferences is better than having a birth plan. Crucially, the preferences should be signed off by a midwife or obstetrician in the latter stages of pregnancy.

“This also enables a chat between the health professional and the woman. It’s not really helpful to arrive with your birth preferences on the day.”

Barry suggests that women look at their birth preferences for the first, second and third stages of labour and their choices if they have a Caesarean section.“We have to remember that one in three Irish women will have a Caesarean birth,” she adds, “so women have preferences around having the drapes lowered, having monitors on their backs rather than their chest, drips on one arm only so you can hold your baby for breastfeeding and skin-to-skin contact immediately after she/he is born.”

When asked what the most important birth preferences are for women, Barry says: “Firstly, privacy, dignity and respect so that women are kept safe physically and psychologically

Barry encourages women having a Caesarean section to ask their consultant to tell them when the baby is about to be born so they can say, yes, I’m ready to let my baby go.

“Deferred cord clamping [waiting till the cord stops pulsating] helps the baby get more iron and some women also want to plan to put their microbiome over their baby’s face after a Caesarean birth.”

When asked what the most important birth preferences are for women, Barry says: “Firstly, privacy, dignity and respect so that women are kept safe physically and psychologically. Secondly, keep mobile for as long as possible. And thirdly, optimum cord clamping with skin-to-skin contact between the mother and baby so that the first thing the baby touches is the mother.”

And will midwives and consultants approve of such birth preferences? “Some will and some won’t – especially if it’s more time-consuming when they are short-staffed,” says Barry pragmatically.

“It’s also important to realise that nothing can be done to you during labour without your informed consent – and that you are entitled to change your mind about your birth preferences at any point.”