Half of Stirling shortlist is Irish 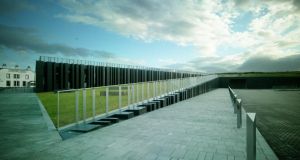 Two practices on the shortlist of six for the RIBA Stirling Prize announced today are based in Ireland, and another, in London, has an Irish principal. Heneghan Peng’s Giant’s Causeway visitor’s centre (right) is up for the award, to be announced on September 26th, as is Grafton Architects’ medical school at the University of Limerick and a chapel in Oxfordshire by Niall McLaughlin Architects.

All shortlisted projects were groundbreaking and delivered more than could have been expected, said the RIBA president, Dublin-born Angela Brady (Brady did not have a hand in choosing the shortlist). The other shortlisted projects are a reinvention of 1960s housing at Park Hill, in Sheffield, by Hawkins/Brown with Studio Egret West; a housing scheme in Essex by Alison Brooks Architects; and a Landmark Trust holiday home in Warwickshire, by Witherford Watson Mann Architects.

Housing crisis: A British solution to an Irish problem
10