More than 800 people from around Asia will be in Kuala Lumpur today for a weekend of Gaelic football, hurling and camogie. It’s just one sign that a fifth of GAA clubs are now outside Ireland

A report from Kuala Lumpur as the final preperations are made for the Asian Gaelic Games 2014. Video: Jerome Quinn/GAA 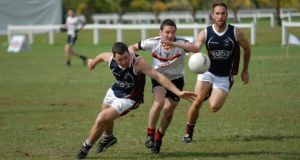 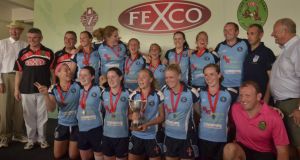 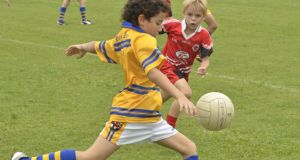 As this article rolls off the presses in Ireland and goes online in the early hours of Saturday morning, on the other side of the world, more than 800 people living around Asia will be taking to a field in Kuala Lumpur for a weekend of Gaelic football, hurling and camogie.

Instead of wearing their county colours, these players will don jerseys with the crests of teams with names as exotic as the Daegu Fianna, Viet Celts, Singapore Gaelic Lions and Jakarta Dragonflies.

By tomorrow evening 65 teams from 26 clubs across 18 countries in the region will have competed in 180 matches in the 19th annual Asian Gaelic Games tournament.

The event has grown hugely since its first outing, in 1996, when just 72 players met in Manila. It is now the largest gathering of the Irish community in Asia and the Gulf. Most participants are Irish people living and working in the region, but many other nationalities, both locals and expats from other countries around the world, have also signed up to play.

“It provides a little bit of home for many participants,” says Joe Trolan of the Asian county board. “The competition and rivalry between teams is as intense as any local derby between neighbouring parishes in Ireland. It is a huge celebration of Irish culture, and importantly, inclusiveness.”

Similar international GAA competitions are taking place in other far-flung locations this month, with the Australasian Championships held in Melbourne last week, and the European GAA Championship finals in Maastricht, in the Netherlands, next weekend.

The popularity of these events highlights just how much the GAA has grown around the world in recent years.

Emigrants took hurling and football with them to Britain and the US in the 19th century, so the role of the sport as a social network for the Irish abroad is nothing new. But the rise in emigration since 2008 has reinvigorated the games overseas, leading to a big jump in the size and number of teams as newly arrived Irish seek out a connection with home.

There are 439 GAA clubs outside Ireland, about 20 per cent of the total. North America has 130 clubs, with 40 in New York alone, while Britain has 83, Europe has 71, Australasia has 64 and Canada has 19. The biggest growth in recent years has been in Asia, with clubs there now numbering 22. The Middle East county board held its congress for the first time this year, with a total of 10 clubs.

“It is exciting to see, but of course the sad part is that it is due to emigration,” the GAA’s director general, Páraic Duffy, said recently at the Kennedy Summer School, in Co Wexford. “Many of the people who play abroad have never played the games at home. But they join it abroad for the sense of community, to meet people and make friends, and the chance to find employment and meet people on a professional level.”

This kind of informal business networking through the GAA is especially prevalent in clubs across Europe, Asia and the Middle East, where Irish communities are small and largely professional.

Many of the players taking part in the Asian Gaelic Games this weekend will have spent the past two days networking with Irish-linked companies and businesspeople at the Asia Pacific Ireland Business Forum. It has piggybacked on the success of the event since 2006 by arranging its annual event on the eve of the GAA competition.

In its recent research on the needs of Irish communities around the world, the Clinton Institute at University College Dublin found that the GAA was unique in the way it engaged the global Irish. The researchers concluded that the sport provides a therapeutic connection with home, with clubs often providing support to vulnerable emigrants who may otherwise fall through the cracks.

“What makes the GAA at home unique is that sense of community, where you are from, who you are, your own parish,” says Duffy. “People bring that with them when they emigrate. It is part of what makes us different as a nation. They want to reproduce that abroad – and the GAA enables them to do that. It is a different model of GAA, in that it is not as much about winning or championships but about taking part, the fun and the enjoyment, and sticking together.”

The Department of Foreign Affairs recognises this role by funding clubs abroad under its emigrant-support programme, amounting to €2.5 million since 2007. This usually goes towards the cost of administration and pitch rental, but it can also be used for capital projects – €600,000 was allocated this year to redevelop the London GAA headquarters, in Ruislip.

“In many parts of the world, clubs are renting local pitches, but we are seeing an increasing demand now for clubs to buy their own property,” says Duffy.

The Clinton Institute found that the GAA was also playing a crucial role in bridging intergenerational divides between older, more established Irish and those just off the plane, as well as a means for children of the Irish diaspora to engage with Irish culture.

At the Continental Youth Championships, held in a different US city every July, thousands of six- to 16-year-olds gather for the biggest international festival of indigenous sport in the world. This year, in New York, 230 teams, with 2,500 participants, played 550 games in 1,400 competitions.

“These are all the children of Irish emigrants, and for them it is about keeping the culture alive,” says Duffy. “Parents could be bringing their kids to Boston one year and San Francisco the next. They can incur huge expense just to keep their kids involved in playing Gaelic games.”

Many clubs have also expanded to include local members or expats from other countries with no connection to Ireland, especially in regions where the Irish community is small.

The Kuwaiti Harps GAA club, for example, has 60 players from 15 countries in its teams.

The GAA is in the process of formalising its role as a support to Irish emigrants, by creating an information pack for players transferring out of Ireland. It will include information about clubs they can join abroad, as well as destination information and contact details for other support groups, such as welfare organisations and mental-health services.

“Emigrants speak with pride about being able to promote the games abroad. That’s what the emigrant game is about,” says Duffy. “It has been a tough time for Ireland, but emigrants are making a huge contribution to the GAA, and our challenge is to make sure we support them.”

‘We’ve got new lockdown rituals, but man, I miss the old ones’
8