Get ready for the 12 Pubs Christmas crawl

Bars are about to become home for December to stag-style parties determined to visit a dozen pubs in one night. Campaigners say publicans should turn away these groups of seasonal binge drinkers 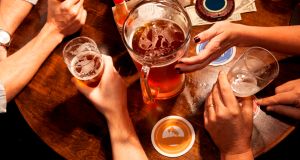 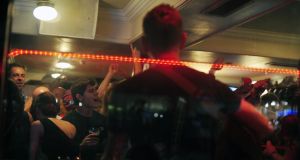 Thanks but no thanks: more bars are turning away 12 Pubs groups. Photograph: Aidan Crawley

The 12 Pubs of Christmas hordes have returned. Although isolated crawlers have been spotted since mid November, this week marks the special point in the festive calendar when this brash species, like cicadas that have lain dormant for months, emerge en masse to slake their thirst, disgorge themselves and even to mate.

Yet they face an uncertain future. Initially a small-scale pub crawl organised by friends, the 12 Pubs challenge has in recent years become both more organised and more prevalent, making Irish bars in December home to permanent stag-type parties. Their aim? To drink alcohol in a dozen pubs in one evening.

This week public-health advocates have called on vintners to ban the crawls. Although they have stopped short of doing so, many pubs are starting to take matters into their own hands. “We stopped serving the 12 Pubs of Christmas because it started affecting our business,” says Ronan Lynch, owner of the Swan on Aungier Street in Dublin. “You get to a certain stage in the night when it’s bananas stuff, you know? We found it was upsetting our customers, it was upsetting to our staff, and meant that other people walked out the door.”

More and more pubs are taking a stand, including Tigh Neachtain, in Galway, Opium and the Grafton Lounge, in Dublin, and Tom Barry’s in Cork.

“We never had a bouncer here until the 12 Pubs,” says Lavinia Hartigan of Tom Barry’s. “And that’s a real shame. It started off on Barrack Street. Now they’re everywhere. It’s mayhem we don’t need.”

For staff in most city pubs that mayhem has already begun. On Wexford Street in Dublin this week one pub had hung a “12 Pubs Stop-Off Pint” banner outside.

It is illegal to serve alcohol to people who are so drunk that they may endanger themselves or other people. Whether drinking eight or nine pints crosses this line remains a subjective test.

“I think the pubs have a lot of responsibility here,” says Dr Orla Crosbie, a consultant heptologist at Cork University Hospital. “I think they could ban [12 Pubs], yes. They already got rid of Arthur’s Day. I don’t think you could condone it.”

Crosbie recently cowrote a study that found that fewer than one in 10 students would limit drinking for health reasons; four in 10 would do so if they couldn’t afford it. She supports minimum-price legislation for alcohol.

“Apart from physical injuries, alcohol also causes severe metabolic abnormalities, which can be life-threatening. Low blood sugar is an obvious one. If they’re dehydrated they can get acute kidney failure. If they vomit and aspirate they can get pneumonia. We would also regularly see people getting seizures, or ending in intensive care.”

Ireland has the highest level of binge drinking in Europe. We drink twice what we drank 50 years ago. Study after study, meanwhile, shows the connection between alcohol and suicide.

“The majority of young men in Ireland who kill themselves are drunk at time of death,” says Dr Bobby Smyth, a consultant child and adolescent psychiatrist. He regards the 12 Pubs as just one manifestation of a deeply ingrained cultural blight.

“Drinking 24 units of alcohol is like putting on a blindfold and running across the M50 for the craic,” he says. “Aside from physical dangers it has unpredictable effects on their mood, from anger to being disinhibited and ending up in dangerous situations. The Rape Crisis Network have highlighted that alcohol is the date-rape drug in Ireland.

“There’s also a minority who go out not in great form anyway, and end up feeling worse. Because they’re drunk they can make decisions along the lines of self-harm.”

This week the Union of Students in Ireland unveiled mentaldrinking.ie, a website designed to highlight the psychological harm of alcohol. Although the USI is sincere in combating alcohol-related harm – it withdrew from Drinkaware.ie last year because of the campaign’s close ties to drink companies – some individual student unions were this week selling tickets for “Christmas crawls” around Dublin.

“We certainly don’t have anything to do with 12 Pubs in USI,” says Laura Harmon, its president. “I can’t speak for all the individual unions . . . If you’re having a drink in every pub it’s binge drinking, and people should be cautious.”

Prof Frank Murray, president of the Royal College of Physicians in Ireland, says, “People who are not used to drinking could end up comatose after 12 pints . . . And women are more susceptible than men to incremental effects; the risk is higher. Pubs have a responsibility to say no to 12 Pubs.”

The Licensed Vintners Association, which represents Dublin pubs, was not in a position to comment when contacted for this story this week. The Vintners Federation of Ireland, meanwhile, refused to call for a ban, saying the 12 Pubs of Christmas was “Dublin-centric” and so not a problem for the federation, which represents publicans outside the capital, despite its prevalence from Cork to Connacht.

Vintners’ policy notwithstanding, campaigners say there is already an obligation to refuse 12 Pubs groups. “The important point remains that it is illegal to serve alcohol to people who are drunk,” says Suzanne Costello, the head of Alcohol Action Ireland. “Most people coming into a pub on a 12 Pubs are drunk. And they’re so easily identifiable. “The vintners really need to take a stand on it. This is organised, high-risk drinking.”

It’s also clear, however, that, thanks to its subjective phrasing, the law is honoured more in the breach than in the observance. “If someone walks in bar with too much drink on board you’ve a duty not to serve him,” says Ronan Lynch of the Swan. “But you have people, pubs, out there fighting for market share. I’ve made my stand: we don’t encourage 12 Pubs. We’re not happy with it. I’m doing what I think is right for my business.”