‘Neither citizens nor aliens’: How will Brexit affect the Irish in Britain?

Opinion: It looks likely the status quo for the Common Travel Area will remain 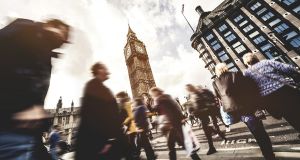 ‘Given the Irish are the oldest migrant group in British society, there is no obvious political or popular will to exclude them from the country.’ Photograph: iStock/Getty Images

We have been here before. This is the not the first time that the rash actions of a prime minister have raised the question of the future of Irish people living in Britain. When former taoiseach John A Costello announced that independent Ireland intended to leave the Commonwealth and become a Republic on a visit to Canada in September 1948, his statement plunged just over 700,000 Irish people “across the water”’ into great uncertainty.

The writer Sean Ó Faolain memorably described this as creating the situation whereby “the only world open to the Irish soon will be the next one”.

Costello’s statement of intent also antagonised the British Labour government of the day led by Clement Attlee, who seriously considered introducing a raft of measures in response, including the imposition of border controls and treating Irish nationals in Britain as “aliens”.

In the end, it was decided that the Irish would continue to occupy a “special position” as neither citizens nor aliens. Under this arrangement, Irish people living in Britain were given the same rights as British citizens.

The issue re-emerged in the early 1960s when immigration controls were introduced on Commonwealth migrants. Again the decision was made to exclude the Irish from the restriction, a position which continued until both countries entered the European Economic Community in 1973.

So for most of the decades after Irish independence in 1922, the Irish retained free access to Britain and had the same citizenship and welfare rights as British residents.

The Irish Government and the embassy in London have issued a number of statements indicating that there will be strong efforts to ensure that the Common Travel Area (CTA), which allows for the free movement of “people, goods and services between these islands” remains in force.

In any case, the CTA predated the current European provisions for the freedom of movement of labour. The only exception was during the Second World War and shortly afterwards when it was suspended.

Even after the UK leaves the EU in 2019, it is very likely that the status quo for the Irish in Britain will be maintained.

First, what was often described by British politicians and civil servants as the “special historical and geographical relationship” means restrictions are almost impossible to implement. It would take huge resources to effectively police the land border between the North and the South.

Second, there is the issue of Northern Ireland and the large number of people living there who hold Irish passports.

And lastly, given the Irish are the oldest migrant group in British society, there is no obvious political or popular will to exclude them from the country. Much of the racist xenophobia that we have heard in the last couple of weeks is directed at other more visible migrants from Eastern Europe, Asia and Africa.

But there’s another side to this story. The Irish Government will no doubt seek to negotiate a “special” arrangement whereby UK citizens in Ireland, who numbered over 100,000 in 2011, and Irish citizens in Britain, about four times that number, have reciprocal rights in terms of residence, work, welfare and voting. No Irish Government would welcome the enforced return of nearly a half a million people within a short period of time.

For those of us who live in Scotland, all this may be just academic. It looks like another referendum on the constitutional position of Scotland within the UK will take place before the exit from the EU. Unlike England or Wales, Scotland has expressed a strong desire to remain within the EU, so the chances are that Scotland will leave the UK and seek to join the EU. Where that will then put Northern Ireland is an even more complicated issue.

Enda Delaney is Professor of Modern History at the University of Edinburgh. He is the author of The Irish in Post-War Britain (Oxford University Press, 2013)