Irish families in Australia 'tend to stick together'

Irish Families in Perth, with 12,000 members on Facebook, is at the heart of the new Irish community 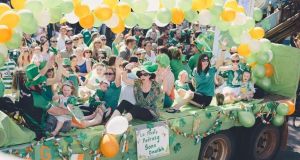 St Patrick’s Day down under: For many people, the family is their main reason for moving to Australia. Many of them came out to give their kids a better life.

Eimear Beattie met her husband, Anthony, playing Gaelic football in Sydney back in 2001. As a young backpacker, she found it easy to make friends through the GAA, or by going to the pub. But when the couple returned to live in Perth 10 years later, married and with two kids in tow, the history and PE teacher from Co Tipperary found it much more difficult to meet people.

With the help of three other Irish women in a similar position, Beattie decided to set up a Facebook group, originally for Irish mothers in Perth, hoping to establish a network for herself.

She thought she would be lucky to find 10 like-minded people to join, but within the first week, they had 22.

The group soon changed to Irish Families in Perth (IFIP), and nearly five years later, membership has grown to almost 12,000.

“Because we had such a huge influx between about 2010 and 2013, the Irish community here has grown massively. Every second person you met in Coles [supermarket] was Irish,” she says. “At one stage we were worrying whether we could cope with the numbers, the way they were growing.”

The Facebook page has become a forum where people can ask questions and post information on anything from visa advice or finding a job, to where to find a chipper that does a soggy bag of proper chips just like home.

“Any time someone comes on our page saying they can’t find a job, you’ll have at least a dozen comments underneath with people trying to help. We have taken over the role of the Irish club, where Irish people used to go for these things when they moved abroad.”

At the heart of the Irish community in Australia now are all the young families who arrived in recent years, says Fidelma McCorry Breen, who is conducting research as part of her PhD on Irish migration to Australia at the University of Adelaide.

“For many people, the family is their main reason for moving to Australia. So many of them came out to give their kids a better life, sometimes because one of the parents hadn’t been working. They need to be around other people who are experiencing the same thing, people who can point them in the right direction about schools, good areas to live in, that kind of thing.

“When a group calls itself ‘Irish Families in . . . ’ such and such a place, that makes people feel they belong.”

“The Irish families tend to stick together, socialise together,” she says.

“They will all tell you that their friends in Australia have become their surrogate family. You can’t do it on your own, you need other people around you, especially people who understand what you are going through.”

The IFIP is perhaps the most successful of the many networks, organised through Facebook, which have sprung up for Irish families and mothers all around Australia. It is now a not-for-profit organisation, with its own committee. It received funding from the Irish Department of Foreign Affairs for several years, under its emigrant-support programme, but has since built such strong sponsorship links – primarily with Irish-owned businesses in the city – that it no longer needs to apply.

Playgroups Funds are used to support four playgroups for Irish mums and babies around Perth, regular parties and family events, and the odd night out just for parents.

Sub groups have developed, including a page for “girls only” about beauticians, hairdressers and fashion; for grandparents who have come to live in Perth or are visiting for a holiday; for singles (“set up by my friend who is no longer single”, says Beattie); and a buy-and-sell page where people can post items for sale, used most frequently recently by families returning to Ireland.

The number of Irish families arriving in Perth has slowed dramatically in the past 12 months, but the IFIP group continues to grow, Beattie says.

“People who have gone home are still on the page giving advice. People want to have their say and this is a place which allows them to do it.”

This article was supported by the Department of Foreign Affairs' Global Irish Media Fund.