Emigrants could get voting rights for three years, Deenihan says

Government is considering possibility of extending rights without holding referendum 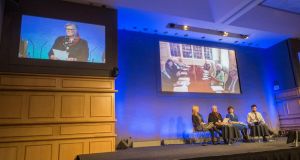 The Government is considering extending voting rights to Irish emigrants for three years after they leave the country without holding a referendum on the issue, the Minister for Diaspora Affairs has said.

Under existing electoral legislation, Irish citizens are entitled to vote for 18 months after they leave the country, if they intend to return to live in Ireland within that timeframe.

Speaking at the first Global Irish Civic Forum at Dublin Castle today, Jimmy Deenihan said there’s a possibility this could be extended to 36 months “without going to the people”.

He said the “home to vote movement”, which saw recent Irish emigrants return to Ireland to vote in the same-sex marriage referendum last month, had captured the “hearts and minds” of the nation. About 110,000 messages using the #HomeToVote hashtag were posted on Twitter over three days.

Extending voting rights was now a “very live issue” as a result.

“I have never seen young people so exercised about voting in my political career, and the fact that so many people came back made a major statement that us politicians will have to take not of and respond to,” he said.

Earlier this year, the Government ruled out holding a referendum on the issue of emigrant voting rights before the end of its term in office. In its Global Irish Diaspora Policy, published in March, a commitment was made to “analyse the policy, legal and practical issues” of who should be able to vote, how, and for how long after they move abroad.

The European Commission criticised Ireland last year for “disenfranchising” its citizens abroad. More than 120 countries worldwide have some provision to allow emigrants to vote from overseas.

David Burns of We’re Coming Back, a youth organisation campaigning for full voting rights for Irish citizens living abroad, said that as emigrants are considered to be “ongoing ordinary residents” of Ireland for three years after their departure for tax purposes, there is no reason why they shouldn’t be considered ongoing residents for voting too.

“There have been a number of attempts to have constitutional amendments on emigrant voting rights, but every time there has been a lack of political will to carry it through,” he said.

“After 30 years of discussion and consideration, and zero reform, I think legislative reform is the only way to get the ball rolling on this issue. It is a first step.”

Mr Burns said the huge number of people who had returned to vote in the last referendum showed emigrant voting rights was “no longer a minority issue”.

“There is clear evidence that there is a desire, especially in the young emigrant population, to continue to vote after they leave Ireland.”