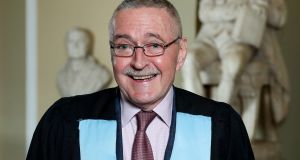 Former environmental editor of The Irish Times Frank McDonald has been made a honorary fellow of the Royal College of Surgeons in Ireland.

Frank McDonald, a former environment editor of The Irish Times, has been made a honorary fellow of the Royal College of Surgeons in Ireland.

Presenting the fellowship, Professor Thomas Lynch – a fellow of the college – said that during his 40-plus years in journalism , McDonald has covered such issues as the destruction of Georgian Dublin, planning corruption, and climate change.

He is the author of several books and has edited and contributed to many others.

He retired from The Irish Times in 2015 but continues to contribute to radio, television and periodicals.

In his citation, Professor Lynch said McDonald was “worthy of the highest distinction this College has to offer - the Honorary Fellowship of the Royal College of Surgeons in Ireland”.