Wine on tap could allow us to drink better wine, perhaps at a cheaper price. It’s already popular abroad, and making inroads into the Irish market 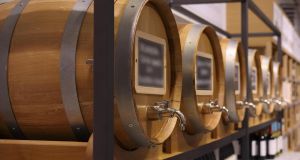 Kegs are cheaper to ship, and take up far less space than bottles. Once opened, they will last up to three months

We are used to pouring our wine from a bottle. This method of bringing wine from producer to table is relatively new, having only come into widespread use in the 17th century when glass became strong (and cheap) enough.

Even then, up until the 1960s most wines, including the very best, were shipped in cask and bottled on arrival by the importer. This lead to certain anomalies: a wine drinker could choose a Château Latour for instance, from three different wine importers. Having being matured and bottled in very different ways, the wines could show marked contrasts.

One alternative to bottles is bags-in-box, which generally contain three litres of wine, and are cheaper to ship. They are not without their problems though, having a limited shelf life and being prone to random oxidation. Many restaurants and wine bars use the Verre de Vin system which removes oxygen from an opened bottle.

Then in July 2013, Ronan Farrell and Richie Byrne set up Winelab, a company dedicated to providing quality wine on tap to restaurants, wine bars and pubs using the Key Keg system.

An experienced professional, Farrell had completed an online two-year winemaking course at UC Davis in California. Byrne brought technical expertise, having worked with BOC Gases and then Bulmers.

“I believe this is the biggest change in how we drink wine in a century,” says Farrell. Invented by a Dutch-German conglomerate, the 20-litre disposable recyclable wine keg uses a flow of compressed air to gently press on a bladder of wine contained within the keg, pushing the liquid up a pipe to the tap. The wine never comes into contact with oxygen or any other gas.

The system has proven hugely popular elsewhere, and not just for inexpensive wine. Many high-quality Californian, Australian and New Zealand producers are happy to use it, as are craft breweries. While it has obvious attractions for restaurants and wine bars, it can also be used to sell wine in a retail shop. Customers at Wholefoods supermarkets in the US fill their own bottles from a tap – an idea pioneered here by On the Grapevine in Dalkey (although from a bag-in-box).

Wines Direct use a similar system, the Polykeg, offering three wines, a white, sparkling and red. “For us, it is mainly for outlets with a fast turnover,” says Linda Applebe, “but it can work very well at house wine level.”

Winelab buys the kegs and sends them on to the winery. Farrell selects the wine himself directly from the producer. “At the start, the idea was to have eight core wines and a seasonal selection. We began with Pinot Grigio, Merlot, Sauvignon Blanc and Prosecco. But we now have 24 wines and will grow further, a demand driven by our customers. There is a cohort of edgy wine bars and restaurants looking for a riskier, more esoteric selection,” says Farrell.

“The huge plus for them is there is no risk in opening up something interesting – it won’t go off.” Kegs are cheaper to ship, and take up far less space than bottles. Once opened, they will last up to three months.

“We are not the cheapest, this was the first critical decision we made – to offer better wine. I save on bottling and transport so I can spend more and buy better quality wine. Our house wines are probably around the same [price] as the competition, but the wine is better. Wherever the system has been installed, consumption has gone up, but it works best in places that take the trouble to explain the positive aspects of wine on tap. Younger people are much more receptive.”

Prosecco producers are less happy with their wine on tap. In the UK, they have pointed out that it is illegal to serve it in this way. Some outlets have dropped the name, but continue to serve the wine. “It is bureaucratic nonsense,” says Farrell. “The same wine comes down the same pipeline. One goes into a bottle and can be called Prosecco, the other goes into a keg and cannot. It’s like saying that if you vacpack a steak it isn’t beef.”

Otherwise, the system is popular with producers and users alike. Winelab hope to expand further into the pub market this year, so watch out for a set of wine taps down your local.