Where the top chefs get new veg ideas 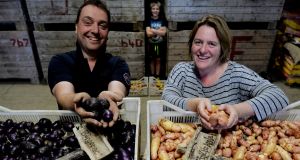 If you have been eating in smart restaurants in the past few weeks, or getting your food fix by scrolling through the Instagram and Twitter accounts of certain well-known Irish chefs, you might have wondered why the country’s potato crop has taken on strange purple and red hues.

The sudden popularity of Purple Violetta and Red Emmalie potatoes is all down to one woman, Maria Flynn, who started growing them last year as a novel addition to the crops she and her husband were producing at their mixed arable farm in Termonfeckin, Co Louth.

“We’d become very disillusioned with farming in the last few years. You put your heart and soul into it, especially with the potatoes, and what’s been happening with them isn’t funny. You’re losing money growing them,” she says of the supermarket-friendly Roosters, Kerr’s Pinks and Queens her husband was cultivating commercially.

“ I decided to look for something that might add value to what we were doing already. I had a conversation with a specialist veg grower in Drogheda who grows for restaurants, and he said that chefs were very limited with potatoes, and that that’s what I should grow.”

She planted a trial run of just eight drills of Purple Violetta, with seed she obtained from Skea Organics in Scotland, in the spring of last year. They went into a field just outside her kitchen window. “I wanted them where I could see them, and every day I could come out and watch them growing, and photograph them.”

She also launched a Twitter campaign to drum up interest in Ballymakenny Farm heritage potatoes, and her pretty, violet-coloured crop caught the eye of several chefs, always on the look out for something new to work with.

Keith Boyle of the Bay Tree Bistro in Waterford took a particular interest in the unusual potatoes, tweeting a succession of images of them used in dishes on his menu. Other well-known chefs, including Kevin Thornton, JP McMahon and Rob Krawczyk also used them in their restaurants, and shared images on social media.

“Then we did the Bite Food Festival in November. It was an investment that we took on that we couldn’t really afford, being honest with you. But it turned out to be the most fantastic four days we’ve ever had.

“We brought some little 2.5kg bags up and we charged €5 and we thought if we made our petrol and toll money back, we’d be doing well. We brought up enough for the four days, and we were sold out by three o’clock on the first day. I got the feeling then that we could be on to something.”

Last spring, certain that she had a success on her hands, Flynn planted 44 drills and extended her range to include Red Emmalie, Pink Fir Apple, Harlequin and Clodagh. Her husband David, who she says was “quite sceptical” at the start, “is now fully behind me and we are looking forward to hopefully growing this side of the business”.

By the time Flynn harvested her 2016 crop, on September 26th, she had done a deal for the entire 16 tonnes with speciality food distribution company La Rousse, which now supplies the potatoes to restaurants and hotel kitchens across Ireland. “Demand is very high, thankfully. There probably won’t be a retail market [for the potatoes] this year, as we will need to keep supply for restaurants,” Flynn says.

There has been an unexpected upside to the fledgling business too, as Flynn extends her network of chef clients. “My husband’s more of a steaks and chips man. We didn’t go to nice restaurants. But what’s great is he’s now on this adventure with me; we’re going to some nice restaurants and he’s loving it.”

Drummond House Garlic: Peter and Marita Collier grow eight varieties of garlic commercially on their farm in Baltray, Co Louth. They began to grow garlic four years ago, and production has been expanding year on year. Last year they harvested 60,000 bulbs. This year’s harvest is treble that.

They are now also smoking their garlic to order, over oak or applewood. See drummondhousegarlic.com

Mooncoin Beetroot: Mark and Helen Murphy began to pickle the beetroot from their garden for family and friends as a way to deal with their bountiful harvests. Then in 2012, they decided to start selling it, and with help from the SuperValu Food Academy they got their produce on shop shelves. They now grow more than an acre and a half of beetroot for their homegrown pickled beetroot and beetroot relish.

This year Mark, who is a chef, grew some different coloured baby beets, and the response from other chefs has been so encouraging that he plans to grow them commercially next year.

Little Cress Microgreens: Dave Heffernan started growing microgreens 18 months ago and the response from the restaurant trade has been so positive that he now has more than 40 varieties of the tiny leaves and shoots growing in a polytunnel on his farm near Fairyhouse Racecourse in Co Meath.

Asian vegetables such as mizuna, and herbs such as basil and coriander, are in big demand by chefs, who use them to garnish dishes. Gourmet grocery store Donnybrook Fair has recently started to stock them too, in trays or punnets from which the microgreens can be snipped as required.

Turbocharge your barbecue: Tips from the pros for cooking over flames
9