Salivate some more in the search for the perfect patty 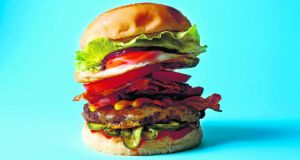 In last week’s Magazine Catherine Cleary gave us her list of the best burger and barbecue joints in the country, leaving us all salivating. Some of our readers got in touch with their own recommendations. Here’s how to tour the country with a burger at every stop.

Gerry Bradley gave the thumbs up to Pyke ‘n’ Pommes street food in Derry. You’ll find it in a van ( yeah, a van) near the council offices/Sainsbury’s along the quay beside the river. “Their Wagu beef burger is something else.”

In nearby Ranelagh, Jane Touhy said: “Has to be Tribeca, tried and true to getting the basics right: the best meat, char-grilled to your choice of doneness (med.rare) on a proper hamburger bun to soak up all the juices – I haven’t found better. They offer all the extras and variations and a good home-made pickle mixture too.”

Patrick Collins stated politely: “Whilst I respect your shortlist in my opinion you’re overlooked the Greenery’s burger. Really ace burger packed with flavours and stacked just the right way. Might be no harm to try!”

On the east coast Billy Farrell praised The Kitchen, Gorey, Co Wexford, “because their burger is built using all local ingredients made from scratch – Angus beef, Coolattin cheddar cheese, crispy baby gem lettuce, tomatoes and the kitchen’s famous homemade ketchup between traditional Waterford blaa, toasted and with triple cooked chips all for 14.50 !”

A little further south on the east coast, James Pelow declared: “Burzza in Waterford. Hands down the best burger I’ve ever had!”

In Cork, Alan Devine named The White Rabbit Bar and Barbecue as having “the best BBQ I have ever tasted and the prices are very reasonable. The pork is simply out of this world!”

Moving west to Co Kerry on the Wild Atlantic Way, Sean Coffey, a self-described “burger connoisseur perhaps”, praised the Heather Restaurant at the Gap of Dunloe where all the meat is locally sourced and prepared in house. “ The lamb burger is made with locally produced 5* Ring of Kerry lamb which is beautifully prepared and presented to the customer in fantastic surroundings.”

Heading North along the Shannon to Lough Boffin, Harkins Bistro has the best burger ever, according to Niall Healy. “My 10 year old son made us go back the next day for more of the same...and 12 months later he still talks about the burger.”

The Lodge Restaurant in Letterfrack, on the Connemara loop part of the Wild Atlantic Way, boasts the “Bernard King organic Connemara mountain lamb burger”, said Jody Pollington. “The lamb is minced in-house with a blend of herbs and seasoning and cooked to order perfectly every time.”