What's a flat white and why is it taking over coffee menus? 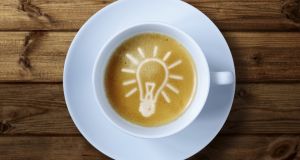 What’s a flat white?  No,  not a paint colour. If you don’t know, you’re not a hipster.  But you’re bound to have seen it listed on coffee menus.

The flat white started in Australia and New Zealand, made its  way to Starbucks in the US, and in the past five months has outsold the traditional cappuccino to the extent that Starbucks plans to phase the cappuccino out. Starbucks’ cappuccino was served in buckets with added flavours, lots of sugar and more froth than a rabid dog.  There was even a cold version – the calorie-laden Frappuccino.

Flat white has become the emblem of the Millennial generation. There’s even a flat white economy, populated by bearded hipsters riding fixed-gear bicycles working in IT. I reckon they went off cappuccino because the froth stuck to their facial hair.

Economist Douglas McWilliams, coined the term in his book, The Flat White Economy where he states that hipsters are greener, more ethical and work in the industries driving the economy.  Let’s put it this way,  in The Grand Canal area, near Google, there are A LOT of coffee shops that do superb flat whites.

But we still don’t know what one is. A flat white is most like café au lait. Il n'y a rien de nouveau sous le soleil, after all. The Bald Barista is  a New Zealander (birthplace of flat white, remember) and has been instrumental in bringing what he sees as the “science” of coffee-making to Dublin, with three coffee shops, the flagship in Aungier Street. His flat white goes like this: two shots of espresso, thensteam and heat the milk to between 65 and 71 degrees Celsius.  Slowly, very slowly, pour the hot milk through the espresso, the way slowly-poured boiling water would make a tiny hole in ice. Fill the cup to within 5mm of the rim. You can make it with soya or almond milk if you like. Some like it with coconut milk.  Every coffee shop has its own recipe.

Nick Seymour, of Nick’s Coffee Shop in Ranelagh, learned his “coffee play” (yes, it’s a term) in Australia, which gives him excellent flat-white credentials.  “It’s our signature drink,” he says.  Like the Bald Barista, he uses a double shot of espresso and heated – but not aerated – milk.  The combination of the coffee and milk has tones of milk chocolate and Demerara sugar, which “makes it moreish”, he says.

Flat whites are cheaper too - another reason why hipsters like them.  Expect to pay about €2.