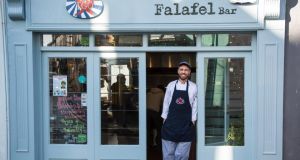 GROW HQ in Waterford has been announced as the Action Hub in Ireland for Chef’s Manifesto, a global network of chefs who are working towards implementing the UN Sustainable Development Goal of zero hunger by 2030, by adopting action plans in their own kitchens.

Conor Spacey of FoodSpace, a contract catering company, is the movement’s ambassador for Ireland, and he will cook alongside GROW HQ’s head chef JB Dubois at a Wasted Supper Club on Friday, September 6th, during the Waterford Harvest Festival; the zero-waste dinner will be entirely created from food waste.

Speakers from the international organisation will attend and the guest list also includes food writer and photographer Mark Diacono of Otter Farm in Devon. Tickets (€45 for four courses and a welcome cocktail) are on sale at giy.ie.

Floris Wagemakers began selling his homemade falafel at the St Nicholas market in Galway in 2005, and expanded his distribution by bringing the popular Middle Eastern snack to music festivals around the country, before finding permanent premises at Mary Street in the city in 2015.

The Dutchman describes TGO Falafel Bar as a vegetarian fast-food concept that has lots of vegan offerings too. As well as the chickpea falafel, served in wraps, pita or salad boxes with all the trimmings, he makes chips with organic potatoes, served with mayo, satay, curry sauce or coleslaw. Prices are very reasonable – from €4 for a two-ball falafel pita with salad, hummus and tahini – and you can buy a bag of 12 falafel to take away for €5.

Thali Tuesdays have arrived at Kerala Kitchen, the Indian restaurant and takeaway on Baggot Street in Dublin 4. Having tested the concept – a selection of home-style Indian food served all together on a traditional metal thali plate – at Theatre of Food during the All Together Now festival, it is now available one day a week.

Meat eaters will find Goan ginger chicken, lamb Chettinad, chana sag and dal on their thali plate, while vegetarians will have chana sag, saag paneer, home-style aubergine and dal. Both come with rice, raita, popadoms and the aubergine pickle made exclusively for Kerala Kitchen by Katie Sanderson, creator of the White Mausu range of condiments that includes the popular Peanut Rayu.

The thalis are available from 3pm on Tuesdays only and cost €20 for the vegetarian and €25 for the meat version.

Wild About, the Co Wexford makers of jams, chutneys, fruit syrups, and pickles, has added a sparkling drink made with nettles to its extensive range. A spin-off from its popular nettle syrup, the fizzy beverage is made for Wild About by Con Trass of The Apple Farm in Cahir. It is made with 25 per cent nettles, grown on Wild About’s organic permaculture farm, carbonated with 4 per cent sugar.

You’ll find it SuperValu in Dublin, Wicklow and Wexford, Ardkeen Stores in Waterford and Nolan’s of Clontarf, as well as the People’s Park farmers’ market in Dún Laoghaire on Sundays (rrp €2.99/330ml).

Lisa O’Doherty, head sommelier at the K Club in Co Kildare, has come up with a novel use for the Straffan Red rhubarb grown on the estate grounds. Its bright red stalks have proved to be the perfect botanical to add to gin, along with juniper, hibiscus, pink peppercorns, cardamom, lemon, lime and orange peel. The resort hotel’s house gin can be ordered as a mixed drink or as an ingredient in a cocktail, including the Straffan rhubarb sour, with gin, fresh lemon juice, rhubarb syrup and egg whites.

Paul Flynn: ‘Cook these comfort dishes, rub your bellies and think of me’