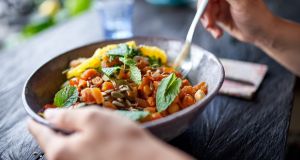 ONA aunched in 2016 thanks to crowdfunding from supporters and a loan from a green bank. Photograph: iStock

A vegan restaurant in France has has become the first such eatery in the country to be awarded a Michelin star.

ONA – which stands for Origine Non Animale – in the southwestern city of Ares, near Bordeaux, was launched in 2016 thanks to crowdfunding from supporters and a loan from a green bank, AFP reports.

Chef Claire Vallée, who runs the restaurant, told AFP she felt like she “got hit by a train” when she received a call last week from the Michelin Guide informing her of its decision.

The guide published its annual French edition on Monday while this year’s Irish and British stars will be announced next Monday, January 25th.

Valleé told AFP she initially struggled to obtain funding for her vegan restaurant through traditional banks: “They said the outlook for veganism and plant-based food was too uncertain”. The chosen location for her restaurant was also not considered promising enough.

ONA is “the first vegan restaurant in France to win a star”, a Michelin Guide spokeswoman told AFP.

A former archaeologist, the 41-year-old chef is self-taught and became vegan after a trip to Thailand, the BBC reports.

Dishes on her seven-dish gourmet menu at her eatery (currently closed because of the coronavirus pandemic) include combinations of ingredients such as fir tree, boletus mushroom and sake, or celery, tonka and amber ale.

In a post on Instagram, Valleé said, “It is because you believed in me, in this crazy bet beyond my doubts, my anxieties, my fears, but also thanks to our common work throughout these last four years that today we obtained our first star in the Michelin guide,” she told her supporters.

“We will continue on this path because this star is mine, it is yours, it is that of the impossible, it is the one that definitively brings plant-based gastronomy into the closed circle of French and global gastronomy,” the BBC reports.