Next Meet the Chef event will feature two chefs, a communal table for 18, and a once-off menu 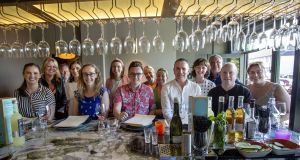 You had to be up early, and have nimble fingers, to secure one of the 15 tickets for our most recent event for members of the Irish Times Food & Drink Club. Gaz Smith, chef proprietor of Michael’s and Little Mike’s in Mount Merrion, Co Dublin teamed up with one of his key suppliers, artisan butcher Rick Higgins, for a Meet The Chef – Butcher’s Edition evening, celebrating Irish beef and lamb. Tickets went on sale at 7.30am, and sold out within five minutes.

There is bound to be equally fervent interest in securing a place at the next Meet The Chef evening, which will take place on July 31st at the hot new Dublin wine bar, Frank’s. There will be just 17 seats available at the communal table in this former pork butcher’s on Camden Street, for a five-course tasting menu and summer cocktail.

Doing the cooking, and the talking, will be Canadian head chef Chris Maguire, along with chef turned restaurateur Darren Free, owner of Frank’s and also of nearby Delahunt. The menu is being created specially for the evening and will include two snacks, starter, main course and dessert. The signature cocktail for the event will be created by mixologist Martin Holec from The Sitting Room at Delahunt, and the cost of the evening is €45.

For more details, sign up for the Irish Times Food & Drink Club here. A link to purchase tickets will be included in the next newsletter, which will be emailed to members at 7.30am on Friday, July 12th.

The second Meet The Chef event took place on the first really sunny evening of the summer, when the gang gathered at Little Mike’s in Mount Merrion, the recently opened wine bar and small plates restaurant a few doors down from Smith’s seafood, steak and pasta restaurant, Michael’s.

Talha Pasha, sommelier and manager of Michael’s, popped in to rustle up a batch of his famous Talha-tini cocktails, and the prosecco, cucumber syrup, mint and lime concoction was perfect for the balmy evening.

Higgins, a fourth generation artisan butcher with a wonderful shop at Sutton Cross in Dublin 13, kicked things off with a chat about the butcher’s secret cut – spinalis dorsi, a narrow strip of meat found between the sixth and twelfth rib, usually sold as part of a rib-eye steak.

Butchering a rib of black Angus beef from Castledermot in Co Kildare as he talked, Higgins extracted the prized cut. “All of the chefs want it. For me, it’s the tastiest cut, it’s the bit the butcher will take home and cook for themselves. If you like the texture of fillet, but want a better flavour, this is amazing.”

But removing this piece makes the rest of the rib-eye a harder sell, Higgins explained, which is why it is rarely available to buy. It also needs careful cooking.

The beef theme carried through to the first course, summer ripened tomatoes cooked in beef fat, to magnify their own meaty umami flavour, served on cornbread. And for the next plate, Smith went back to his true love, seafood, and served yellowfin tuna tartare with sesame dressing and Dublin Bay prawns.

Then it was time to actually taste that spinalis dorsi, and it lived up to its reputation, the meat meltingly tender and flavoursome and more than a match for the punchy Béarnaise served alongside it.

Beef reduction was also listed as a component of the dish, but it wasn’t a gravy or a jus. “The crust on top of the meat is a labour of love. We take all the fat, as close to the skin as we can, and we confit that for four to six hours and it slowly, slowly crisps up like pork crackling, and then we chop that up and serve it on top of the beef,” Smith explained.

After a few questions from the group, and time to explore Little Mike’s excellent wine list, Higgins was back centre stage – with a side of lamb over his shoulder. Deftly, he butchered and French-trimmed the rack, while at the same time fielding questions about why mutton isn’t more popular, and why “spring” lamb is actually far better eaten in midsummer. The lamb was then roasted and served with summer vegetable ratatouille and potato and onion cakes.

Dessert was supposed to be butterscotch mousse, but perhaps in a nod to the arrival, finally, of summer weather, Smith shepherded his guests down to the local newsagent, McGuire’s, which he had persuaded to stay open late, for 99s all round.

Lifting the lockdown: A new way of buying and selling houses
10