The economics of wine

How a €1.85 bottle of French wine ends up costing €30 in a Dublin bistro,and the other restaurants offering better value 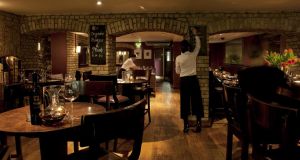 Eating in a trendy, casual city-centre restaurant recently I came across a modest French wine for €30. I happen to know the producer in France receives €1.85 for the same wine. The importer probably takes around €1.50-€1.70, the Government a generous €8.80, leaving €18 for the restaurant.

Seems a lot for opening a bottle of wine? High margins may be justified in the case of Michelin-starred restaurants that have huge overheads, a cellar of maturing wine and a team of qualified sommeliers. But a well-run bistro can turn over its stock of wine several times before paying for it, and the staff often don’t have any wine knowledge at all.

Arguably the real culprit is the Minister for Finance. Restaurant mark-ups here are roughly the same as in France and the UK (around 70 per cent), but our base costs are much higher. In France, a very decent €4 bottle of wine would cost €16 in a restaurant. The same bottle in Ireland would cost the restaurant around €9 from a wholesaler and €37 on their list. Recent increases in duty mean a wine that once sold for €25 in a restaurant is now over €30.

I am familiar with the arguments put forward by restaurateurs; they have very high overheads. Some have cut their food margins (traditionally the same as wine) to appear good value and then increased wine prices. A teetotaller may get great value, but as a wine lover I find it difficult to pay €45 or more for a bottle of wine that is available for €15 in my local wine shop. Many hotels and restaurants deliberately try to source “restaurant exclusive” wines that customers will not be able to compare. But punters are not stupid and tend to opt for the least expensive wine on the list. Establishments then find that they can only sell the less profitable house wines and are forced to increase their prices still further.

Erik Robson of Ely wine bar in Dublin has re-launched his wine list with substantially lower prices than before. The result is a mouth-watering list of great wines at fantastic prices. The excellent Willunga 100 Grenache is €28 in Ely but €39.50 in a restaurant nearby and €17 in a shop. He also lists the superb Sang du Cailloux Vacqueyras for €46, as against €69 nearby and €30 in a shop. “We had a really busy January,” says Robson. “Our house wines sales are down, wines selling at €30-€50 and even from €50-€70 have increased. Our staff morale is brilliant, they have a renewed confidence and are excited about selling wine again. It means we need to get more customers in, but so far it is working.”

Dublin wine bar Fallon & Byrne also offers wine at great prices; you can drink any of the 500 wines in the shop for a €10 corkage. “From the day we opened, we have been operating the €10 idea,” says manager Dave Gallagher. “It is great value if you trade up.” Certainly few restaurants can offer the delicious Dom Perignon on their list for €185 a bottle. Corkage drops to a mere €1 on Happy Mondays. The upstairs restaurant has a more expensive list, but customers can still avail of the €10 corkage from any bottle in the shop two floors below.

Is it a coincidence that both Robson and Gallagher have a background in the wine trade? Certainly both have an unerring nose for great wine. Other good examples include Kelly’s Resort Hotel in Rosslare, Co Wexford with one of the best wine lists in the country at amazingly cheap prices and The Hole in the Wall on Blackhorse Avenue on Dublin’s northside where you can drink wines (and craft beers) from their shop at no extra cost. The Vintage Kitchen on Poolbeg Street in Dublin city centre does not charge any corkage at all. Just remember to drop into a decent wine shop on the way to dinner.

I have no problem with restaurateurs making a profit. But I do think a decent bottle of wine is an important part of a good meal. I have mentioned just a few examples of restaurants taking a refreshing attitude to wine. I know here are many more.


Do you know any well-priced lists around the country? If so, share them with us – and Irish Times readers – on our Facebook page, facebook.com/IrishTimesFood, or email us at jwilson@irishtimes.com (with “Wine list” as the subject). We’ll publish your responses here in a couple of weeks.