The book, to be published next summer, is the Big Night, Julie & Julia and The Devil Wears Prada actor’s third food book 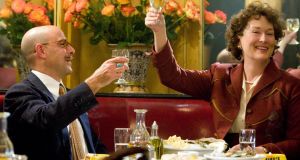 Tucci with Meryl Streep in a scene from Julie & Julia, a film about the life of the American cookery writer Julia Child.

The actor and director Stanley Tucci is to write a food memoir to be published next summer. The deal was done by his literary agent wife, Felicity Blunt, sister of actor Emily Blunt, with whom he starred in The Devil Wears Prada.

Taste: My Life Through Food will be published in July by Fig Tree. The publishing company describes the book as: “An intimate and charming reflection of his life and relationship to food, filled with anecdotes and memories from growing up in Westchester, culinary experiences while preparing for and filming Big Night and Julie & Julia, among others, falling in love over dinner, and his home life where he is constantly preparing meals with his wife for their family. Written with Stanley’s signature style of wry humour and nostalgia, his memoir will be his gastronomic journey through life...so far.”

Fig Treet publishing director Juliet Annan said, “I had read Stanley Tucci’s wonderfully funny Atlantic piece, and as the publisher in the UK of Julie & Julia and Laurie Colwin’s Home Cooking, this felt like a great match. I knew no other publisher should be allowed to get near his Negronis; luckily my colleagues at Penguin General agreed and we pre-empted from Felicity Blunt within 24 hours.”

In that Atlantic piece, about cooking his way through lockdown in the UK, where he lives with Blunt and their children, Tucci wrote: “If there is no Kerrygold butter left in the United Kingdom, it’s because it’s either in our freezer or we ate it. All of it.”

Tucci has previously published two cookbooks in the UK, The Tucci Table, co-written with Blunt, and The Tucci Cookbook, which is a collection of his Italian family’s recipes.

Big Night, which he starred in and co-directed with Campbell Scott, was made in 1996 and is considered to be one of the best food movies of all time. Set on the Jersey Shore in the 1950s, it tells the story of two immigrant brothers from Calabria trying to save their failing restaurant.