Simple food can still be delicious, and add up to more than the sum of the constituent parts 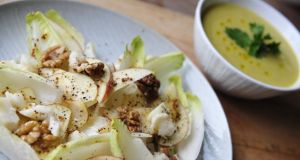 A cinch, a piece of cake, child’s play, as simple as ABC – all of these words are music to my ears when it comes to recipes. Because if it’s straightforward enough, there’s a chance you might cook it. Or at least that’s the plan.

I wrote last week about the gift that is ‘lazy’ food, but there’s also a vast number of recipes I categorise simply as ‘easy peasy’. In any language, that means recipes that even my six-year-old could tackle, if I were insane enough to let her near my sharp knife or the gas burner.

But even she can appreciate the simplicity of some dishes. And there are times when I can tell she’s thinking, “seriously mum, anyone could make that”.

And it is the point. Life is a juggling act of priorities and appointments, pressures and pleasures, and while I’ve said it a million times, I think anyone who makes an effort to cook fresh food regularly is a star. So please don’t beat yourself up if it’s an omelette and not a three-course meal.

Of course, every now and then, an occasion will demand something a bit more fancy, and then it’s great to up your game. But on a day-to-day basis, don’t wreck your head. Keep it simple.

Simple doesn’t mean food devoid of flavour or imagination. Many of my recipes are straightforward assembly jobs. The key is the combination of ingredients and a few essentials such as sweating, stewing or, my personal favourite, “put in a blender and whizz”. The success of the dish comes, then, from how those ingredients work together to create something that is more than the sum of its parts.

All of this is by way of a preamble to two recipes that are really easy to make and yet, by dint of their ingredients, wouldn’t be too shabby if you served them at, say, a relaxed lunch. The first is a no-brainer, superfast, veg soup where no matter how recklessly you chop the veg, you can’t fail to produce a decent soup, thanks to the cream, leeks and garlic which give it its luxurious smoothness.

The second is for a very pretty salad of chicory, apple and goat’s cheese that is lifted by a dressing that includes wholegrain mustard (and it must be wholegrain) and honey. And if you like blue cheese, by all means put that in instead. dkemp@irishtimes.com