So, what makes coddle a coddle?

Aoife McElwain answers questions about food you didn’t even know you had. This week, we look at the Dublin stew 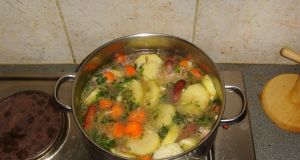 Coddle: what this Dublin stew of watery boiled sausages lacks in aesthetics, it makes up for with a heavy peppering of nostalgia.

What makes coddle a coddle?

“He has a face like a sausage coddle” is perhaps one of the most savage insults I’ve ever heard. What this Dublin stew of watery boiled sausages lacks in aesthetics, it makes up for with a heavy peppering of nostalgia. But what makes coddle a coddle?

I put in a call to Martin & Sons, a third-generation butchers on Meath Street near Dublin’s city centre. “I’ll put you on to someone now,” says the young fella who answers the phone, “and you can talk to him about a coddle or a cuddle, whatever you’re into.” I speak to coddle enthusiast Keith Honer, who has worked at Martin & Sons for 15 years.

Honer explains that white coddle is made with water, while those making brown coddle add a packet of oxtail or vegetable soup to the mix. You add thin sausages, ham or bacon, and spuds. Some people add carrots and white pudding, to the protest of purists. “Coddle is definitely making a comeback,” says Honer, “for the same reasons it was popular back in the day. It’s cheap and cheerful, and you can get two or three days out of it.”

Over on Dublin’s northside sits a seventh-generation pub called John Kavanagh, known to Dubs as the Gravediggers. “When my sister and I started developing the food menu 10 years ago,” says chef Ciarán Kavanagh, “I asked the regulars in the pub for ideas. Everyone wanted coddle, but everyone had a different idea of what coddle was. If I talked to 100 people, I would get 100 different recipes.”

Kavanagh developed his recipe after researching how coddle was eaten in Dublin’s tenements at the turn of the last century. “They would have used whatever was left over and cheap, so that’s the off-cuts of bacon, the trotters and ribs.” Ciarán’s Coddle features slow-cooked bacon ribs, thin sausages cooked in a broth flavoured with onions, a few herbs and spuds. It might look a bleedin’ state but when it’s done right, coddle is as comforting as any slow-cooked stew.