Select: a taste of the best Culture Night has to offer 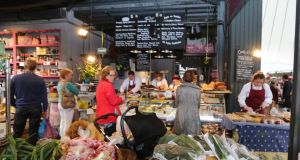 Friday sees the return of Culture Night, the annual event where arts and cultural institutions around the country open their doors for a night of free tours, talks and performances.

Food increasingly features on the Culture Night programme, and there are lots of events to whet – and sate – your appetite. We’ve selected a few worth checking out.

In Dublin, as part of the Hodges Figgis Book Festival 2015, Rick Stein – the accomplished chef, restaurateur, cook book author and TV presenter – will be in conversation with Henry McKean in Hodges Figgis Dawson St at 6pm. You can pick up a copy of his latest book, Rick Stein: From Venice to Istanbul (on a gastronomic road trip he undertook through the countries of the former Byzantine Empire) and get him to sign it.

There are more exotic flavours at an event taking place at 18-19 South William St, run by Afra-Eropach, the Afro-European Exploration Meet-Up group. The cultural food tutorial will include demonstrations – and all important tastings – of recipes from a number of African countries, plus live African music throughout the evening. See meetup.com/afro-european-exploration-meet-up.

Closer to home, Airfield Estate in Dundrum – hot on the heels of its own food festival last weekend – is holding tours of Airfield House from 5pm to 9pm, with a look at the archives of the former owners, the Overend family. On the food front, you can taste some recipes made with food grown on the estate in the revamped Overends restaurant, and there will be samples of milk from Airfield’s own herd of Jersey cows. See airfield.ie

To whet your whistle, head back into town, where the new Teeling Whiskey Distillery – which is the first to open in the city in more than a century – will be hosting free tours for the evening. Jack and Stephen Teeling, the latest generation to produce whiskey at the new distillery at 13-17 Newmarket, Dublin 8, will be on hand to share the family’s legacy of more than 230 years of distilling knowledge (and maybe a drop of their own uisce beatha) See teelingwhiskey.com.

Nearby at the Mendicity Institution, Dublin’s oldest working charity based at 9, Island Street, Dublin 8, you can get a taste of the food served to the poor in the workhouses of Dublin in the 19th century. This popular event has been running for a number of years on Culture Night, although the quality of soup and bread from nearby Mannings bakery is far superior to the original, we’re sure. There will be costumed performances throughout the evening, recreating life in the institution from the 1800s. See mendicity.org

Over in Smithfield, Bluefire, a non-profit community enterprise in Dublin 7 will be holding a summer picnic in Smithfield Square from 6pm to 10pm. The last of a series of summer picnics, the event will include tango and salsa dancing, live music, workshops, Down the Rabbit Hole Hoopers – a troupe of performers who use LED hula hoops – and other entertainment, while you enjoy a picnic on the square. You’re invited to bring your own picnic basket, but local businesses will also be serving food including Oscar’s Bar and Grill – try their Inferno chicken wings with lime mayo, €9. See bluefiredublin.ie

In Cork, Nash 19 (19 Princes Street), which is usually a daytime-only restaurant, will remain open from 6pm to 9pm to host Artists meet the Artisans. Provisional View, Rebecca Bradley’s exhibition of paintings, will be on show in Sternview Gallery at the back of the restaurant, while up front you can meet local artisans such as Tim McCarthy from Mc Carthy’s Butchers in Kanturk, Frank Hederman from Belvelly Smoke House and Sarah Grubb from Cashel Blue while tasting some of their produce, including carpaccio of McCarthy’s air dried beef; a five-year-old Cashel Blue with slivers of fillet of beef and a Llewellyn balsamic reduction, or a goats’ cheese with hazelnut and garam masala crumb with beets. Music will be provided throught the night in conjunction with Sounds from a Safe Harbour. See nash19.com.

Also in Cork, the Franciscan Well Brewery will be hosting brewery tours and beer tastings, where along with seeing how they make their beer, you can pick up some tips on homebrewing, beer tasting and food pairing. See franciscanwellbrewery.com. Or head to L’Attitude 51 (1 Union Quay) for a “virtual wine tasting”. A screen will project Irish winemakers around the world such as Dermot Sugrue of Wiston Estate, West Sussex; Marian Smith of Elgin Ridge, South Africa and Fleur McCree of Little Beauty, New Zealand in a live tasting. They will talk through their wines as they are poured for participants in L’Attitude. See latitude51.ie

In Limerick, the Milk Market is hosting more of a Culture Day than night, with events starting at 10am and running until 8pm. There will be live music, a cookery demonstration from Tom Flavin, executive chef of the Strand Hotel, plus crafts and arts and an on-the-day photography competition. The artisan producers in the market will be selling their food all day, including Peter and Mary Ward’s Country Choice, which won Best Market Stall in this year’s Irish Times Best Shops in Ireland. See milkmarketlimerick.ie

On the outskirts of Limerick city, Mungret College will host A Plate of Mungret, where the myth of the Salmon of Knowledge will be re-enacted, after which the poor chap will be cooked and you can eat him with homemade brown bread (there are no promises of increased knowledge though). There will also be homebaked cakes and treats, plus veteran gravedigger Patsy McCarthy will give a talk on the traditional items Irish people bury with their loved ones.

Finally, back in Dublin, The Irish Times will also be taking part in Culture Night, with the return of Downstairs Dublin, when the newspaper takes over 25 basements around Merrion Square, promising unusual happenings in tiny outdoor spaces. In one of those basements - number 63, home to the Royal Society of Antiquaries of Ireland - we’ll be hosting Soundbites, a dining experience with a difference. It’s a chance to try some great food cooked by Aoife McElwain of Forkful, along with matching wines from O’Brien’s, all while you and your dining companion (who you’ll have just met) work your way through a menu of interesting questions, quips and topics of conversation. It’s a chance to eat, meet and shoot the breeze with sittings every half hour.

Entry is free, but places are limited, so head to number 63 at 5pm on Friday to put your name down for a place.

There are lots of other food events on around the country. See culturenight.ie