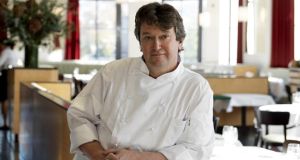 ‘Did you know that vegan males have 33 per cent sperm count as against a non-vegan?” Chef, Financial Times food writer and confirmed omnivore Rowley Leigh shares this nugget of information he’s gleaned from Twitter with a schoolboy chuckle.

He’s in Dublin for the Web Summit, using his skills as a moderator on the Food Summit stage and investigating what Dublin has to offer as a food capital – dinner with Tom Parker Bowles at One Pico (a pitstop at Doheny & Nesbitt and margaritas at House), and his first, he admits, chef’s table experience, at Chapter One restaurant.

He’s an observant, not casual, eater, as you’d expect of a writer who can get to the essence of a seasonal ingredient and distil it into one must-cook recipe in a relatively compact space.

But it’s his appreciation of wine (don’t say passion: he abhors the word used in relation to food or wine) that makes a lasting impression over dinner. “You could say they’re intellectual wines. They’re bone dry and they just evolve slowly on the palate and are a very pure expression of their grapes,” he says of his choices.

You’ll find Leigh on Twitter as @LeCafeAnglais, but that’s probably going to change. He recently sold the Bayswater restaurant after seven years.

Although his name is still associated with the restaurant and he’s rightly described as “one of the founding fathers of modern British cooking” on its website – he no longer cooks there.

He is reluctant to comment, but says: “I am trying to extricate myself. I feel responsible for the fact that 30-odd of my staff are still working there. I want to see a good outcome for them.”

One former staff member no longer on the payroll is his daughter Ruth, who moved with her husband, a chef, to Hong Kong to manage a restaurant Leigh has just opened for hotel and restaurant group, Swire. Named the Continental, it was designed by David Collins Studio.

“David did all the sketches and the general layout before he died. He chose a colour scheme of oak and green marble. The menu is entirely mine. It’s my pared down, very simple style of cooking. What people don’t understand about simple is there’s a great deal of work involved; you’ve got to get it perfect. I’m a dinosaur really. I haven’t evolved or changed.”

Leigh spent two months in Hong Kong setting up the restaurant and plans to go back three or four times a year. Home will continue to be London, though he has plans to move to the country at some stage. “I’m in Acton, but I’m trying to go far west, to Somerset, but it’s taking a bit of time. I’m trying to lose my children in the process.”

He has three children, the youngest 16, and two step-children. “There are five of us in the house at the moment; the step-children have moved back in. They say ‘it’s cheaper, we don’t have to pay rent’.” There also would be the lure of those “simple” home-cooked meals.

Though born in Manchester, Leigh spent some of his childhood in Belfast, where his father set up a linen business. The family returned to England and he progressed through public school to Christ’s College, Cambridge where, as he puts it, “I was supposed to be studying English”.

Surprisingly, for such a much lauded food writer – he has been awarded the prestigious Glenfiddich award three times, for work for the Guardian, the Sunday Telegraph and the Financial Times – he claims not to read the work of other food writers.

“I don’t read any current food writers, because I find it puts me off. It just muddies the water. If I read something someone has written about turnips, I’ll think, ‘oh well, perhaps I can’t do turnips’. I’d just rather follow my own little furrow really. I don’t often read a modern cookbook and I certainly wouldn’t read a cheffy book.

He says he isn’t going to write another cookbook, which is a great shame in this era of a-book-a-year output from some. But it might make my first edition copy of No Place Like Home – his wonderful book with illustrations by Lucinda Rogers, published in 2000 – more valuable.

“They’re quite rare,” he tells me as he signs it for me – spelling my name correctly without having to ask. “Some people say ‘do you mind signing this for me? The idea one might mind . . . when in fact it’s incredibly flattering.”

With Leigh’s wealth of experience, I ask what he looks for in a restaurant when he goes out to eat. “I suppose I want exactly the same things everybody else wants, and maybe more so. I like glamour, conviviality. I want good, unobtrusive service.

Although he’s 64, Leigh says retirement isn’t on the menu. “I can’t possibly afford to. I’ve just got back from Hong Kong – to not having a job. And then this came up [working with Good Food Ireland at the Food Summit]. I should be doing more moderating and interviewing. I find that really stimulating. I’d like to do more radio work, too.

And does he have interests other than food? “Food doesn’t interest me very much. It’s what I do. I quite like writing, I like reading and I like wine.”

Simple pleasures indeed (till I sneak a look at the price of the wines he likes) and understand explicitly why he can’t afford to retire. Lucky for us readers, then.

Ross O’Carroll-Kelly: ‘I’ve never been much of a conversationalist, but I’m on fire with this woman’
8