Richard Corrigan reveals line up for 10th Taste of Dublin 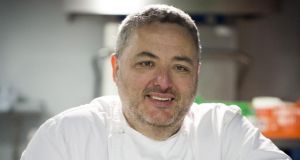 Chef Richard Corrigan is the second recipient of a Taste Icon Award, following on from restaurateur Myrtle Allen, who was singled out for the honour in 2011. The award is presented by the organisers of the culinary event, Taste of Dublin, which this year celebrates its 10th year. The award is being presented at a lunch in Restaurant Patrick Guilbaud in Dublin today to launch this year’s event.

The Ballivor-born chef, who has three restaurants in London and a country house hotel, Virginia Park Lodge, in Co Cavan, was nominated for the award “for his pioneering work championing quality Irish produce and ingredients”, according to Taste of Dublin.

His three London restaurants last year enjoyed what he described as “ a record year”, and renovations in advance of its official opening are continuing at his Irish investment, Virginia Park Lodge. The country estate, where he plans to grow vegetables for his own and other London restaurants, is currently open for private hire and events.

This weekend Corrigan hosts a “Garden Stay” at the hotel, which includes accommodation, dinner and a tour of the grounds and gardens with the owner himself. The overnight package is sold out, but limited tickets for dinner on Saturday night, May 2nd, are still available to purchase online at virginiaparklodge.com. Dinner will cost €60 and “the menu will consist of fresh produce from the gooseberry gardens, specially designed by Richard Corrigan”.

The line-up of participating chefs and restaurants is still being finalised, but the headliners are once again London chefs Michel Roux junior and his former right-hand woman and senior sous chef Monica Galetti. Galetti recently resigned from her position at Le Gavroche, after 12 years, to pursue another opportunity in London.