No-show problem is ‘rampant across the country’ 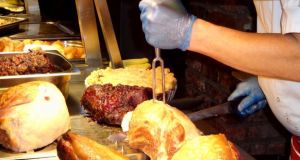 The Restaurants Association is suggesting members take a non-refundable deposit of €20 for bookings for tables of more than four. File Photograph: Getty Images

The Restaurants Association of Ireland has called on its members to take non-refundable deposits from customers in order to halt the growing problem of ‘no shows’.

Adrian Cummins, Chief Executive of the association said the problem was “rampant across the country” over Christmas with around a fifth of bookings in the average restaurant turning out to be no shows.

In a bid to combat the problem, the association is suggesting that members take a non-refundable deposit of €20 for bookings for tables of more than four. The deposit would then be deducted from the final bill, but if the party does not turn up the deposit will be forfeited.

“We wrote to all our members advising them of a deposit policy to stamp out no shows in restaurants. Restaurants need to establish whatever deposit they feel they need to take and the minimal time for cancellation,” Mr Cummins told The Irish Times.

“In the average restaurant between 15 and 20 per cent of bookings were no shows [over Christmas]. That’s a substantial amount of no shows in a busy time. That’s the difference between surviving and not [SURVIVING]for some businesses. If you get a no show at 9pm, you’re not going to fill that table.”

Mr Cummins said he received “a resounding yes” from the association’s 3,000 members.

“They are all very supportive of it, some will say it doesn’t suit their business model and that’s fine. The vast majority say they will do it and there are a number of restaurants that are already doing it.

“Once businesses see that other businesses are doing it, it makes it easier for them to go ahead and implement the policy. We feel that the vast majority of restaurants will bring it in in 2018.”

Mr Cummins said the Competition Authority will not allow the association to set a specific amount, but he thought an average deposit of €20 was fair.

JP McMahon, chef and restaurateur said “by and large it is better than it was”.

“In Aniar we require credit card details on Saturdays. If we lose someone on that day we take a €40 charge per person. We’ve only had to do it once since opening and they didn’t answer when we rang them. I’d never just charge someone without finding out first what happened.

“Even on New Year’s Eve, in the three of our businesses, people were dropping like flies. We went from 41 to 26 in Aniar. I presume just people changing their minds. I just took the hit. Most in Aniar had rang during the day and six were a no show. You take the good and the bad.”

Kevin O’Toole, head chef and co-owner at Chameleon restaurant in Temple Bar said they are currently considering changing their requirement for a €10 deposit (which is reimbursable) for tables of six or more down to tables of four or more.

“It’s not something we like doing but it’s just part of it, because we’re a fifty-seater we have to protect ourselves.

“We’re a small restaurant and there was one particular weekend over Christmas where on a Friday nine people didn’t show up, on the Saturday 12 people didn’t show up. It’s something the whole industry needs to look at. Individually we don’t really have much of a voice, but when we’re together we do.”

Bryan McCarthy, executive head chef at Greenes restaurant in Cork city said it had its “worst Christmas ever” for no shows and last minute cancellations.

It plans to introduce a new policy whereby all reservations on weekends and all groups greater than five for every night must be secured with a deposit.

“A table of ten people had booked in October for Friday, December 22nd. They would have gotten emails and a text message 48 hours beforehand offering them to confirm, cancel or alter their booking.

Let there be light: how to create the perfect ambience in your home
6