Review: Peploe’s is a staple on the business lunch circuit and you can see why 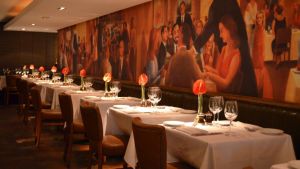 It’s quite the statement to grasp a wine bottle by the neck shortly after noon and give it a good shove. The bottle is the handle on the door into Peploe’s on St Stephen’s Green. It’s made of chunky bronze and the feel of it in your hands says: “Goodbye cruel city. Hello boozy lunch.”

Inside, there’s that clubby feeling of having stepped into deep indoors. Night could fall outside or the sun could split the stones and we would be none the wiser. Spotlights are pooling light down on red wax lilies that dot the white linen tablecloths. Chairs and banquettes are upholstered with toffee coloured leather. There’s a long, mud-coloured mural of a bar and restaurant scene along one wall. It’s all very Mad Men without the smokes.

My friend was last here with an advertising agency, an expense account dinner in a corner table. Today, there’s a deal being discussed by the only other occupants at this stage in lunch. Large sums are mentioned by a man talking loudly. You’d kill for an ear trumpet (surely Google is working on something) to amplify the mumbles from the more discreet half of the conversation.

Old school business lunches that can cost €30, even out of an expense account, need a “no-one leaves hungry” promise of heft to them. It’s a meaty offering here. There’s a single vegetarian dish on the starter list. Nothing without a face on the mains. And yes, top marks for guessing. Beetroot and goat’s cheese are two of the veggie starter ingredients.

There’s one good starter, a luscious tumble of Ardmore salmon tartare lightly dressed with a creamy kick of horseradish yoghurt. It’s got a Scotch quail egg on the side, where the meaty lagging jacket is chorizo rather than sausage meat which works on all levels.

Sadly my “handmade” crab tortellini have been made by a shoemaker rather than a seamstress. The chewy pasta dough is a leathery green. Basil, spinach, wheatgrass? Take your pick. Nothing other than colour has been added to the dish. Small chunks of scallop with roe attached are nicer than the wasted crab, whose flavour has been obliterated by the heavy-handed pasta. A tangy cream sauce with tomatoes adds a welcome piquancy to the dish.

My main course is, happily, much better. It’s two excellent slices of “London broil”, a dish that would get you blank looks in actual London as it originated on the other side of the Atlantic. Here beef has been dry-aged and marinated for a long time and cooked for a short time, before being sliced on the bias like good cloth.

There’s so much wine going on between marinating and sauce, it’s a transubstantiation where beef blood and red wine have morphed into one delicious element. Underneath these luscious slices are perfectly cooked sprouting broccoli.

The only element that doesn’t work is a tired and claggy oxtail arancini. Some new spuds glistening in salty butter would have been pitch perfect.

There’s an excellent slab of a Farmers to Market free range chicken across the table, with more red wine, this time in a sweet and blousy risotto. Alongside it there’s a gorgeously bitter chargrilled tardivo, a variety of radicchio, with wine red leaves scorched at the edges that balances the sweetness of the chicken and risotto expertly.

Desserts are spot on. There’s a chocolate fondant that is warm, dark, and wallowing in its own richness. And a good rhubarb and strawberry crumble with ice-cream.

In the end, we’ve sparkling watered our way through lunch rather than venture near the wine list. Neither of us can afford a lost afternoon.

The owner of Peploe’s famously bought the visitor book from the long-gone Jammets restaurant in Nassau Street, signed by John Lennon. “The other three are saving up to come here,” the Beatle wrote. The purchase showed a respect for Dublin’s restaurant history, a small keeping of the flame gesture.

I like the good ingredients they’re using, reaching just that little bit further. Peploe’s isn’t going for the dizzy heights or prices of Jammets. It’s consistent food that’s good enough to justify its price but not so brilliant that it’s going to get in the way of a lunchtime deal. Lunch for two with sparkling water and coffees came to €75.30