From a Blackrock shed to a city centre location, Fish Shop is a welcome addition to the capital 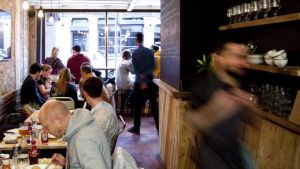 It’s difficult to imagine a street less regal than Dublin’s Queen Street. Especially this evening, with a cold sky starting to spit rain. Three lanes of angry traffic are speeding towards the quays, making Queen Street as charming as a motorway siding.

But there’s a refuge in sight. Fish Shop sits at the bottom of a townhouse near the Luas line. Like much of the Georgian architecture round here, it’s a building that has seen better days. But inside the handsome black painted shopfront, we are hugged by a delicious fug of flavour. If smells were colours this one would be golden with darts of iridescent silver.

There’s something very simple happening here. It’s as simple as the logo for the shop, the open ended triangles from maths class that meant greater or less than and finished with another triangle for the tail. This is a fish and chip shop where you can get a bowl of juicy clams with a sherry vinaigrette so good you might want to bring your own bread to mop up the liquor.

The decor is repurposed timber, real crumbly old brick and salvaged school chairs and tables. There’s a plywood floor and a forgiving layer of blackboard paint is on the plasterboard of one wall. The drinks list is so brief it’s more of a wine haiku. But it’s no cut-and-paste of the usual suspects. They’ve picked different seafood-friendly whites. Metalman beer comes in cans.

The specials are chalked on the wall and the list tells you where your fish comes from, grounding your meal in a sense of place, like Sligo, where tonight’s clams were fished.

It’s a casual crowd. They’ve nailed a friendly welcome. A young couple with Dublin’s best-behaved baby park their buggy in the last piece of free space.

Oysters (three of them) are served in huge teardrop shells, the oysters fried in a fluffy crisp tempura and topped with a finely chopped salsa of cucumber, onion, coriander and chilli. They’re entry-level oysters, the batter taking the slurp out of the eating experience but lightly enough cooked to retain a burst of briney flavour.

And then there’s a big bowl of those clams, nubbly bits of seafood, more sinewy than their fat continental cousins, but making up for it in taste. Could I get some bread to mop up at the end because to tip it away would be a travesty? The bread is being sourced, we’re told. “Can we hold onto the bowl until it arrives?” I ask, picturing someone sprinting round the corner, but it’s sourcing in the restaurant sense rather than in the nip out to Spar sense. In the end, two pieces of brioche do the job.

This breadlessness gives the impression (and I could be entirely wrong) of an elves and shoemaker scenario. As my colleague Marie Claire Digby wrote, the couple behind this shop, Jumoke Akintola and Peter Hogan, wowed people in Blackrock market with their fish and chips shed after moving home from London, where they left teaching jobs to run a street food smokery. They opened this restaurant last month on what looks like a shoe string.

The main courses arrive on white dinner plates (hurrah), with an enamel bowl of golden twice-fried chips. I think we tried everything apart from the mussels (next time).

At €19.50 my brill isn’t cheap, but it shouldn’t be because the fish is better than anything I’ve ever winkled out of a batter coating before. It has none of that mineral hum that older fish gets or the soggy batter when a once-frozen piece of fish gushes its water content into its lagging jacket as soon as it hits the fryer. It’s simply brilliant.

The “Fillet O Fish Shop” is a towering brioche stuffed with great battered hake, crisp lettuce and a delightful apple and fennel slaw where the green shards have been mandolined so thinly the juices of fennel bulb and apple have blended into a third flavour.

And desserts? Niamh is working on a rhubarb trifle but it won’t be on until Thursday night, we’re told. “Can we just stay here until tomorrow night then?” the dining companion asks plaintively, making us more needy than the six-month-old at the next table.

Even dessertless, I love this place, and if I have to bring my own bread until they get their legs fully under them, that’s fine. The fish more than makes up for anything else that’s missing. Great news. Crumbly old Queen Street just got herself a destination restaurant.

Dinner for two with a glass of Reisling and two beers came to €62.50