Review: Dinner in a museum has never felt as much of a treat

All the playful bells and whistles of a fine-dining establishment, at a heist-worthy steal 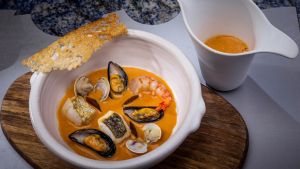 They bring you a fish head in the Bistro at the Guggenheim in the Basque city of Bilbao. It’s yellow with overlapping scales, a goatee and two eyes on the same side of its head, like it has been three-d printed directly from the brain of the late Roald Dahl. It’s the size of a kettle and the lovely waiting staff just leave it on the table for you to summon up the courage or curiosity to lift up and see what’s inside.

You don’t expect this kind of playfulness in one of the world’s most famous buildings, Frank Gehry’s undulating temple in its mermaid’s skin of titanium scales. If a fine-dining establishment is appealing to your inner child you can be pretty sure they’ll be charging you extremely grown-up prices. But there are all the bells and whistles here at a steal so good it’s positively a heist.

The Bistro at the Guggenheim is a hidden treat – like the hummus on a wooden platter with a tiny wooden knife alongside that we find under our fish head. We spread it on still-warm bread and look around a beautiful room overlooking Bilbao’s Nervión river. There’s a marble floor and red-wool banquettes with soft cushions. Those of us not sitting on the banquettes sit on Gehry hat trick chairs – lengths of bent maple, the design for which was sparked by the architect’s memories of the surprising strength of the flimsy wooden apple crates he played with as a child.

If Bilbao was an American city it would be a rust-belt city district on its knees. Monuments to its mining and industrial past loom on its hinterland. But in the 1990s a decision was taken to reinvent a dying industrial city with architecture, art and culture. Like Dublin, it has a Calatrava bridge. Unlike our car and truck-choked version, their bridge by architect Santiago Calatrava is a pedestrian one. As we walk over it to go to dinner, a barefoot busker riffs out jokey descriptions of passersby all in song. You’d like to see him try that in Dublin.

There’s a Michelin-starred restaurant at the Guggenheim too. Chef Josean Alija’s Nerua is set on the other side of the building, with its own entrance and offers, I imagine, all kinds of exquisite takes on Basque country food.

But I don’t feel wistful for the pricier option because here there’s a tomato salad I will still remember weeks later. It’s the simplest plate of tangy, sweet, slippery, Spanish tomatoes, grown on vines outdoors in sunshine, and only here and now, an experience of feasting on the end of summer. The second starter is also from the same vine, a life-enhancing tomato gazpacho with tiny tangy cubes of pickled watermelon and prawns to add a sweet, seafood, savoury note.

My “creamy rice” as the menu calls it is just that. It’s cooked with saffron, which can sometimes be the shouty singer in the choir that drowns out everyone else, but not here. There are sweet juicy clams in this and a cloth rolled up like a bandage alongside to wipe your fingers afterwards. There’s a tuna wedge cooked lightly and quickly to leave a livid seam of fudgy fish in the middle. It comes with violet onions from Zalla, a small town nearby. The sweetly delicious variety of onion is in danger of dying out and is grown mainly by women farmers at high altitude to keep the precious variety from cross pollination with other, lesser onions.

Desserts are a caramelised sheep curd which tastes like a tangy meringue melded with a cloud and then dotted with chunks of the best apple. Jeanne’s raspberry ice-cream is all the summer in one spoonful, with crunchy violets in shards of meringue for that Parma Violet childhood memory.

Dinner in a museum has never felt as much of a treat as the coffee on the terrace experience that ends the meal. The staff (did I say how lovely they are?) encourage us to go onto the terrace overlooking the river. We take giddy photographs of ourselves tucked in alongside the skin of this marvellous building, and wonder why no one else is here.

Food culture is the Cinderella culture in our museums and cultural institutions. The Bistro at the Guggenheim shows how things should be done. Three courses and a drink costs €30 apiece, with a €7 supplement for the tuna main with those marvellous onions. Reader, we came back the next night and did it all again.

Dinner for two with two glasses of wine came to €67