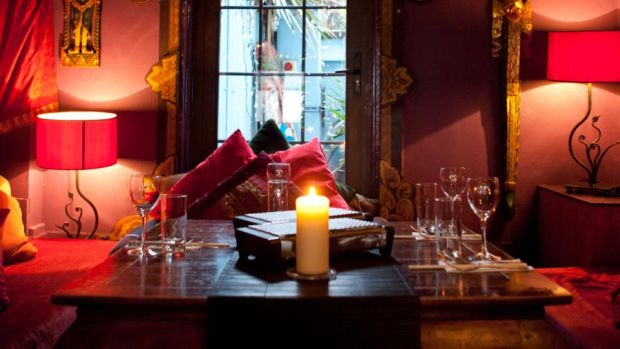 It’s strangely fitting to feel the corners of my passport in the depths of my bag as I’m rummaging for my keys tonight.

I’m back from the past, that other country called the 1990s, a place where I know all the words to the songs. It seems like the feeling has spilled onto the streets of Temple Bar. A car nosing its way through the crowds is driven by a man stripped to the waist (you’d hope it’s only to the waist), his torso, neck and face painted green, white and gold, with a nylon green wig on this head. Italia ’90 how are you. And after the meal we’ve just had, a spot of time travel has never seemed more apt.

Chameleon still has its 20th birthday sticker in the window even though it’s all grown up now at 21. “The tastiest steamed buns in Dublin are here,” reads a chalkboard on the footpath on Lower Fownes Street. “Well, they are now,” my professional one-liner friend remarks as she sashays through the door.

Inside it’s all low lighting, deep purple painted walls and a stippled ceiling. Is it our first visit, we’re asked? It is. So we get what the waiter calls the “brief spiel”. We might still be there if we’d opted for the saga.

Chameleon does set menus of Indonesian dishes which are brought to a hot plate in the middle of the table. They light the tea light candles after you’ve ordered. They’ve also added a list of “Asian tapas” plates and craft beer as a nod to the flow of time outside the door of this cosy, friendly place.

So we do both, a Lombok menu, named after the Indonesian island, with a mix of small bowls from the tapas menu. And the Shane Long moment is the first mouthful of the small rectangle of coal-black short rib beef. It’s been cooked for a “minimum of six hours but sometimes up to 12,” we’re told. The time has done its alchemy of turning sinewy muscle on bone into treacly silk with a sweet, blackened, star anise crust.

Peanuts are to Indonesian food what tomatoes are to Italian food. Both were introduced from South American in the 16th century to the countries that then put them at the heart of their cuisine. Indonesian satay sauce is thicker, not as jammy and sweet as the Thai version and so it is here, where the brown paste tastes obviously house-made. It’s spooned over chicken on a stick: not the white, tasteless, battery breast you often get at this price level, but free range brown leg and wing meat, the cheaper cut of the bird which is, like its large animal equivalent, also tastier.

And those steamed buns? Well, they’re the best I’ve had in Dublin. They’ve resisted the cheap trick of putting sugar in the dough but kept it bone white and tooth-sticky in texture.

The pork belly comes with what the menu accurately describes as “fiery kimchi” and the brisket is a milder option with a five spice kick. Described by the waiter as the “comfort food”, they’re a La-Z Boy lounger in food form, but also a Marmite texture experience. You love them or hate them. The friend hates them.

There are golf-ball sized crab cakes which also have haddock in them and come with a chilli mango salsa. There’s a delightful sunny yellow Balinese vegetable curry with toasted grated coconut dusted over it, along with some roasted cashews, good chunks of butternut squash and still crunchy green beans in a creamy coconut milk sauce. There are potato cakes with something described as pickled aubergine mayonnaise on the side, which tastes more like curry mayonnaise. In a good way.

The only dud dish of the night is the tempura mushrooms – heavy batter clad portobello mushrooms which are watery and leaden.

We’ve gone for a Howling Gale and a Hurricane IPA which slide down extremely nicely alongside the spice of a great meal. A slice of passionfruit and raspberry tart has a glassy burnt sugar lid and we finish with two good herbal teas. I would spend my own coin here happily. It’s a new old favourite in Temple Bar. Dinner for two with beers and teas came to €88.90