Pi: The best pizza restaurant in Dublin. No contest 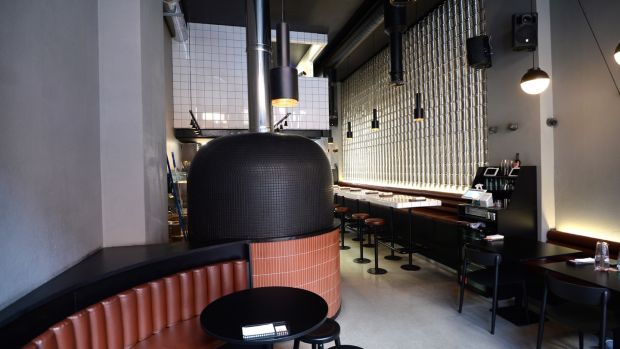 There’s something very fully formed about Pi on Dublin’s George’s Street. It feels like the Irish branch of a chain incubated somewhere cooler. There are speckled concrete floors, subway tiles, a black tiled wood-fired oven like a gargantuan Darth Vader helmet and the name coming at you from the 1980s in cheesy 3D graphics. There’s the black cutlery that your eyes tell you is plastic but is, in fact, hefty and real, like the gold-coloured dessert teaspoons which I predict will be pocketed by the dozen.

A bucket of cash has been poured into Pi and that’s typically the starting point for yet another review (believe me, I bore even myself by now) lamenting the lack of substance behind the style.

But hold those horses – it’s such a joy to tell you that Pi is terrific. Bringing slow food to a bigger audience and making the favourites with better ingredients are common themes with chefs. Go fly you fledgling concepts, we whisper. But they stutter and fall and we’re left with artisan-washed menus and cocktails in jam jars.

In the weeks before opening they brought pizza geekery to honours level, sweating the details like which flour and tomato to use, while firing out the excited Instagram posts

And then you get someone who just loves something and a backer who gets it. Reggie White is the pizza fanatic behind Pi. His business partner is John Savage, a son-in-law of property developer Johnny Ronan. After my visit I mine Pi’s Instagram feed for information and then message White for a chat.

The 34-year-old is a former auctioneer who quit in the depths of the crash and went to train in Ballymaloe, where he fell for wood-fired pizza. Hard. He built a pizza oven in his parent’s garden in Abbeyleix and worked the pizza station in his brother David’s restaurant, which happened to be Flour + Water in San Francisco’s Mission District, the tangy bubbling epicentre of the sour dough scene.

So Pi has been eight years in the baking. Childhood acquaintance Shane Palmer of Scéal Bakery grew up in the same part of Laois, and White worked with Scéal to get the dough to do what they wanted it to do. In the weeks before opening they brought pizza geekery to honours level, sweating the details like which flour and tomato to use, while firing out the excited Instagram posts of people getting the keys to a sweet shop which is also a toy shop.

We arrive early on a Thursday evening, which suits a family dinner and the fact that queues form after six. It’s walk-ins only. We sit at the back of the long room which is bright thanks to a west-facing window. There’s a diner in a high chair chomping on the pillowy sour dough crust and adding her happy noises to the general buzz.

This is not a pizza restaurant that does salads or sides. They just do pizzas, 12-inch pizzas. The priciest one is €16. Doing one thing seems like a fresh idea these days when a blizzard of menu options is the default setting. To do just one thing you need to do it well. And they do.

The pizzas come out of the belly of the furnace with puffy crusts dotted with charred blisters in what’s known (fun fact) as “leoparding”. It makes the crust of these pizzas as good as the rest of them and gives a reason to order the dips, the only side on the menu, to make the very best of them. There’s meat on some of the pizzas but it’s from the less is better school, cured and spiced tasty bits of pig, like the Gubbeen chorizo on the salsiccia with piquillo peppers, as well as the tangy heat of pickled chillies.

The funghi (not made with sliced-up dolphin as one of our lads suggests) has frondy hen of the woods mushrooms with two kinds of cheese – Grana Padano and fontina. There are fresh spinach leaves and a sage cream to add two different riffs of green flavour. It’s heartening when the veggie pizza is the best (and most expensive) one on the menu. There’s a vegan one here too which sounds delicious.

Our boys love the margherita option, where again nothing is dumbed down, from the truly tomatoey sauce to the higher-end cheese.

Dessert is a small steal from the brother’s restaurant. A “chocolate budino with sea salt flakes” started life across the pond in San Francisco, but that’s okay because it’s delicious, a pot like chocolate in butter form or butter in chocolate form, whichever you prefer, with those crunchy flakes of salt drawing your tastebuds’ attention to the silky sweetness.

Pi smells like a franchise. If they can scale up the idea and the attention to detail and keep it at this level across a few pizza restaurants then here’s a chain you could love. As I’ve frequently declared, the best pizza in Dublin is round ours, thanks to our in-house pizza geek and a recently acquired wood-fired oven. But we only do five covers, 12 at a push. So Pi is the best pizza restaurant in Dublin. No contest.

Dinner for five with soft drinks, a beer and one shared dessert came to €76.80.

Music: Nice but mostly inaudible as the crowd builds

‘I had this thing for Ireland, I felt drawn to this place’