Before moving to Ireland, chef Takashi Miyazaki worked in the five-star Hotel Nikko Fukuoka in his hometown as a Teppenyaki chef 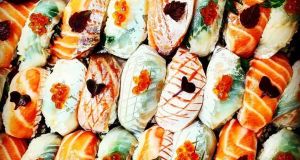 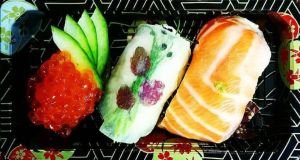 On a recent trip to Cork City, I ask a taxi driver about the Miyazaki Japanese Take-Away. Has he ever eaten there? “Absolutely,” he says with that delightfully distinctive Cork lilt. “The noodle soup is magnificent. You know, the chef there cooked for presidents and celebrities back in Japan.” He pauses, as he turns a corner, and then asks, “I wonder why he moved to Cork?”

Takashi Miyazaki is the chef in question. He comes from the Fukuoaka Perfecture in Kyushu in southwest Japan. Before moving to Ireland with his wife and business partner Stephanie while she finished her studies on our emerald isle, he worked in the five-star Hotel Nikko Fukuoka in his hometown as a Teppenyaki chef. It was here that he cooked for a diverse range of patrons that included President Jacque Chirac, Rod Stewart and Sting.

After three years, respectively working and studying in Offaly, Takashi and Stephanie settled in Cork, looking to open a restaurant serving real Japanese food. “We settled here because it has a fantastic food culture, and great quality land and sea produce,” Takashi tells me. They found the space they were looking for on Evergreen Street, opening Miyazaki in March 2015.

John and Sally McKenna of The McKennas’ Guides are big fans, naming Miyazaki their Chef of the Year in their Restaurant Awards for 2015. The respect is obviously mutual; I spy a copy of Sally McKenna’s excellent seaweed book Extreme Greens next to some Japanese food magazines on the slender counter, designated for people who want to eat-in rather than take away. The Beatles are playing on the stereo, which reminds me of Haruki Murakami’s beautiful novel Norwegian Wood as I pull up one of the six stools in this snug spot to absorb Miyazaki’s alluring bowl of noodle soup. Behind me, through the kitchen pass, I can see Takashi working quietly and steadily.

There are sushi rolls, bento boxes, curries and donburi (rice bowls) on the menu but I’m here for the noodle soup. I go for the daily special, Takashi’s Lemon Ramen (€13), a clear, deeply flavoured broth served with silky noodles and hunks of slow-cooked beef ribs so tender that I can easily pull them apart with my chopsticks. It’s truly heavenly. It’s hard for me to put into words how delicate and accomplished this soup is. It’s the type of comforting perfection that I’ve been chasing in my own kitchen at home, to serve up a nourishing broth that soothes all that ails my loved ones and I.

A Kakiage noodle soup (€9.50) is no less startling in its integrity. Heaped on top of the dashi broth is the specialty this soup is named after; strips of finely chopped vegetables and shrimp, sizzled until crisp in a tempura batter. Our noodle soups, and a cup of Japanese Green Tea (€1.80), brought our bill to a total of €24.30.

Miyazaki’s noodle soups are built around a dashi broth, a type of stock typically made from Kombu seaweed, and you can choose between Udon or the thinner Soba noodles. Takashi tells me that every chef in Japan has their own special recipe, and that the type of dashi you use depends on the dish.

“To get the synergy of umami,” he explains, “I keep a balance of glutamic acid from the kombu, inosinic acid from the bonito flake and guanylic acid from ingredients like mushrooms. This is the signature taste of my dashi.”

Takashi says he is on the lookout for a restaurant premises to open a ‘Kaiseki Izakaya’ but he has no plans of moving on from his humble takeaway. “I will keep Miyazaki Japanese Take-Away as the origin of the Miyazaki soul,” he says, which is good news for the happiness of the souls who eat there.

In Irish orphanages, being ‘coloured’ was a defect. I wish Mam had lived to see Black Lives Matter
3

Hanging up my fork: My final three meals as Irish Times restaurant critic
4

A week of eased restrictions: ‘It’s reopening way too fast’
5