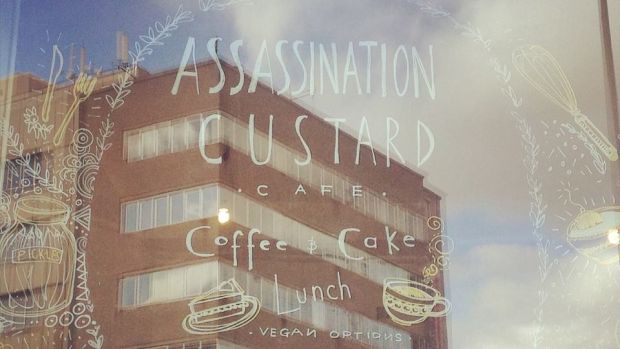 There’s a story about how James Joyce and Nora Barnacle brought George Bernard Shaw a gift of an Assassination Custard after Shaw had been stabbed by a pimp. It’s a story told to me by Ken Doherty, proprietor and chef of Assassination Custard, Dublin 8’s newest daytime café which opened in September. Doherty works with his partner Gwen McGrath; they both cook, bake and serve in the café.

It’s the teeniest of places, on the corner of Kevin Street and Heytesbury Street, which locals may know as The Little Café. You’ll spot it by the illustrations of custards on the window, the jars of pickled turnips and the day’s cake sitting in the windowsill looking out onto Kevin Street Garda Station. The menu is short, changes daily and is made up of small plates taking inspiration from Italy and the Middle East.

“You find out who your friends are when you serve tripe sandwiches,” Doherty tells me as I tuck into a small plate of buttery roasted cauliflower sprinkled with crunchy toasted dukkah (€3). Indeed, there isn’t a ham sandwich in sight. Instead, alongside my plate of cauliflower, for lunch I have some rich, roasted pumpkin hummus drizzled with date syrup served with a homemade roll (€3.50), and a plate of purple sprouting broccoli doused in the spicy Italian ‘nduja pork sausage and cooled down with blobs of silky Toonsbridge ricotta (€4).

Coffee and a slice of cake is €3.50. Yes, I thought that was a mistake, too. But it isn’t. For my €3.50, I get a well-brewed coffee, from local roasters Two Fifty Squared, and a generous slice of semolina and orange blossom cake served with a dollop of yogurt.

The place itself is adorable; it’s so small they only have one round table with four chairs around it, designed for communal eating. The effect is kind of like an eccentric little bedsit. I share my table with two women who are surely Assassination Custard’s target audience; their delight with the different flavours in the plates they share over lunch are vocalised by a series of oohs and aahs of appreciation.

Alongside the occasional tripe sandwich, they offer a Panelle, a Sicilian chickpea fritter sandwich, for €4.50. Assassination Custard is not for those who prefer to grab a quick lunch. It’s not for the food for fuel brigade. It’s for those who want to engage with their lunch, and perhaps try something new.

Even if tripe isn’t your thing, how can you resist a €3.50 cake and coffee deal?