Gaillot et Gray is still putting itself together, but it’s off to a great start 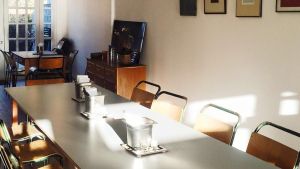 A small rant from an old friend. Yes, he likes his neighbourhood getting fancier, but it needs to be done in baby steps. He could handle it when the Hacketts bookie shop closed down, was stripped out and painted tasteful dove grey. The last straw was when they added a new name up over the door: Gaillot et Gray.

It’s the “et” that pushed him over the edge. It’s too much of a leap, he says, coming over like Kimmy Schmidt’s landlord Lillian, a one-man campaign to de-gentrify Leonard’s Corner in Dublin 8. All this as he sips coffee in Bibi’s and talks about his idea to bring tweed wallpaper to a waiting world.

I’m not conflicted about this one. Gaillot et Gray is a good thing. I’ve no idea how Hacketts smelled when you pushed open the door, but I’m guessing it wasn’t a scent that curled around you and whispered “you’re home”. Where once were betting slips and TV screens, now there’s a brick wood-fired oven.

In the morning they bake great wonky cannonballs of bread, their tops ringed with flour where they sat proving in their baskets all night. By the time we wander in for pizza, the place smells heavenly, like the warm inside of a just-cooked loaf .

Gilles Gaillot and his wife, Emma Gray, are the couple behind this venture, which they expanded out of a pizza van (which they still run). The Clanbrassil Street business is a bakery by day and a French pizzeria by night. The emphasis is on Frenchness, which means Emmental cheese, not mozzarella, on the pizzas.

It’s just pizza, the varieties of which are listed on a 1970s pin board. And, yes, there are school chairs, white walls and a shared table. But this is hipsterdom with heart. There will soon be wine, they say, but they need the stamp on the paperwork to release the boxes of French (natch) vino into the world.

In the meantime, you can buy a beer from the great craft selection at the Headline Bar a couple of doors up and bring it in. Desserts are also in the pipeline. Until then, the halal supermarket next door on the other side sells pistachio kulfi by the tub. Soft drinks come from Limerick-based Wild Orchard, the pink lemonade coloured with cranberry juice.

This is our second visit to Gaillot et Gray. The first time we came it was good but raw around the edges, like a party in a new house while they were still unpacking the boxes. Since then, they’ve bedded in nicely. The bread is settling into itself, too, in that particular way that sourdough evolves. Their croissants are the best I’ve eaten in Ireland. Not a high bar, I know, but still.

There’s one large shared table beside the counter and a waiting area for the takeaway trade. We get a smaller table down the back, where a small concrete garden that’s currently the wood store is waiting for some plants and tables to turn it into more dining space.

The pizzas arrive on silver platters and everyone gets their own cutter in a jar at the table. They couldn’t look more handmade if they had been knitted.

One is not so much circular as speech-bubble shaped. The scorched flour on the base turns one of my sons into a goth, blackening his lips as he chews happily. That charred flour adds its own dusting of bitterness to the flavour of these pizzas, along with a smokiness that food scientists would kill to recreate in a lab for a freezer aisle version.

Toppings have changed since last time and I go for a half and half of the two most alluring. Bayonne ham an Emmental, sweet and leathery on one side with a juicier spinach mushroom and just-toasted pine nuts on the other.

The base is all that is good in sourdough pizza – biscuit thin and crisp but puffed up to airy crisp pockets along the rim where it’s not weighed down by toppings. I’m about as gluten intolerant as a hungry Dublin pigeon, but crap pizza tends to reform in the pit of my stomach, feeling like it’s reassembling itself somehow. This doesn’t.

So, welcome to the hood, Monsieur Gaillot et Mademoiselle Gray. Enchante to have you. Well, most of us are anyway.

Dinner for five with soft drinks came to €60.

A Greek chicken souvlaki that is fun, fresh and familiar
Real news has value SUBSCRIBE