The secret might be overblown, but this new Drury Street restaurant is worth a visit 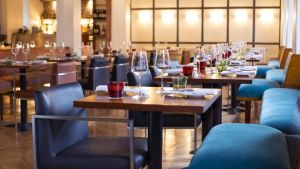 Marketeers, flick back those glossy tresses and listen up for a sure fire way to sell your restaurant. First, decorate the entire front of your building with a cartoon graffiti mural to make it look like a comic book shop. When you take down the steel shutters, ripping off chunks of mortar above the doors, don’t gussy them up like new. Leave those bare brick scars showing. Make sure to pull heavy curtains across the doors during daylight hours so would-be diners have to peer in like nosy neighbours. Hang nothing so brazen as a menu in the window.

Most importantly, don’t dream of giving your restaurant a name. That’s right. Nothing, nada. But if some old-fashioned types insist on something around which to organise their night out, sigh and say “Okay you can call it Drury Buildings. ”

Restaurants don’t normally play this hard to get. It’s downright ornery. But Drury Buildings is the latest venture of restaurateur and bar owner Declan O’Regan. Hogans is the nearest thing he’s come to embracing the whole business-with-a-name idea. His L’Gueuleton has never put its name above the door. Then there’s the No Name Bar. Drury Buildings opened first as a cocktail bar and then, three weeks before Christmas, as a restaurant on Dublin’s Drury Street.

It’s a street so wedged with restaurants that it may be about to test the precise tipping point of Dublin’s midrange scene. John Farrell’s nearby venture, the long-delayed Super Miss Sue, has suddenly emerged from the builder’s dust. There may be more big rooms serving food in this small redbrick corner of Dublin than there are punters to fill them.

I’m meeting a woman who thought I was an Aga. Yes, Grainne Dwyer entered both our Food Month competitions and for those moments before she returned the call from The Irish Times, she wondered how she’d remodel her parents’ kitchen to fit the Aga. So thank cupcakes she won the night out with the critic prize, right?

She’s young enough not to be able to remember the time when people queued in the street to secure a table at l’Gueuleton because it was a revolutionary establishment. Breaking ground is something you typically only get to do once. Drury Buildings is firmly in the midrange groove its unpronounceable predecessor first ploughed.

Inside the look is less grungy urban and more clean Scandinavian lines (think Borgen series three), with the bar downstairs and restaurant upstairs. There’s a hint of dentist about a wall of perspex cupboards with fluorescent lights set behind them. There’s a pale honey parquet floor and old school radiators.

I glimpsed the first menu, messaged by a friend, who had developed a cocktail crush on the place and was there the night the food started. There are a few changes already, which indicates a kitchen thinking on its feet. It’s Italian gutsy cooking of the rustic-country school rather than the pizza and pasta line.

The big hit of the menu is the range of terrific ingredients and, for the most part, they deliver on their promise. There are clean milky quivers of Toonsbridge ricotta in Grainne’s prosciutto salad with butternut squash. My scallops miss the mark as they’re only crisp on the top and come with a slightly too earthy Puy lentil mix. This has, I think, been cooked in a seafood stock, but it’s still a little too muddy. I’d have liked more of the tangy salsa verde.

There are successful deep midwinter flavours in my main course, a Wicklow pigeon done saltimbocca style, rolled in a prosciutto and sage leaf blanket, with triangles of herbed polenta that look like hash browns. The side veg are terrific; perfect spears of sweet sprouted broccoli sprinkled with toasted almonds and gorgeous baby beets with their stalks steeped in purple juice.

Grainne’s seafood fritto misto is lemony and crisp but a whole Dublin Bay prawn entombed in batter goes back to the kitchen uncracked.

Her dessert is good. Mine isn’t. She gets rum and raisin ice cream served affogato (drowned) with a coffee poured over it from a jug. My kaki fruit (or persimmon) looks like a brandy glass a third filled with marmalade but is an insipid stewed mix that has neither zing nor zest to it.

Two excellent cocktails and a glass of the Sauvignon and a French Syrah round it off nicely. The next morning I notice the Visa receipt reads “Secret Bar, Drury St, Dublin 2.” In an oversharing over-marketed world maybe trying to keep yourself a secret is the real secret. This works in the long term if the food at the heart of the secret is worth finding. They’re still finding their feet, but overall I think it is.

Dinner for two with two glasses of wine, cocktails and a mint tea came to €127.80.