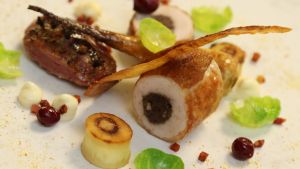 TURKEY: Remove the small fillet from the turkey breast. Cut the breast lengthways. Cut two thirds down the middle of each half breast to make a pocket.

Place the fillet with the black pudding and the egg yolk in a blender and liquidise while slowly adding the cream. Place half of this mixture into each pocket of the turkey breast. Roll each of the turkey breasts in cling film and tie each end securely.

Place the wrapped, stuffed breasts in a large saucepan and cover with warm water. Use a thermometer to make sure you keep the water at 60 degrees over a low heat for 1.5 hours, then remove the breasts and leave them to cool.

Heat an oven to 180 degrees/gas 4 and place the unwrapped breasts on a roasting tray. Brush each breast with butter, some chopped sage or thyme and season with salt and pepper. Roast in the oven for 45 minutes approximately. Remove the turkey from the oven and keep it warm while it rests for 10 minutes.

BACON CHEEKS: Soak the bacon cheeks in cold water overnight. Place them in fresh cold water in a large pan. Add the onion and bay leaves, and simmer over a low heat for an hour – or until tender. Remove from the water and stud the cheeks with the cloves. When you’re ready to serve, brush with honey and mustard mixed together and glaze under the grill. PARSNIPS: Wash and clean all the parsnips. Place four of the large parsnips on a layer of salt in a baking tray. Bake in a pre-heated oven at 180 degrees/gas 4 for one hour. Remove and leave to cool a little. While they are still warm, cut the parsnips in half lengthways and carefully remove the flesh with a teaspoon. Liquidise the flesh with a little chicken stock and melted butter until you get a smooth puree – not too thick – and season with salt and pepper. Cut the skins you’re left with left lengthways again and deep fry until crisp.

Peel the remaining large parsnips and cut into thick slices, then use a small round cutter to shape the slices so that they will all be the same size. Heat a pan and add 100g of butter. Place the circles of parsnip on the pan and saute for about two minutes or until they go a nice brown colour. Add a little chicken or vegetable stock. Season and place in the oven at 160 degrees/gas 3 for 10 minutes. Remove them and keep them warm.

Place the baby parsnips on the same tray as the large ones and bake in the oven at 180 degrees for 20 minutes or until tender. SAUCE: Bring the orange juice, sugar and the ginger to the boil. Add the orange rind and cranberries and simmer until the cranberries soften. Leave to cool.

PLATE UP: Carve the turkey and place some on a plate, with a bacon cheek. Spoon the parsnip puree onto the plate, then arrange the discs of parsnip, the crisp fried parsnip skin and the whole small parsnip. Garnish with cranberry sauce, sprout leaves and chorizo crumb.