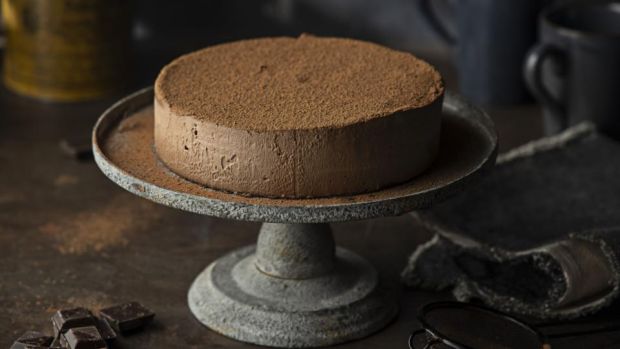 For the chocolate sponge:
1 Preheat the oven to 190 degrees or 175 if using a fan oven. Grease the base of a 20cm springform cake tin and line with a disc of parchment paper.

2 Put the butter and chocolate into a heatproof bowl over a saucepan of simmering water and stir until melted. Alternatively, melt the chocolate and butter in the microwave. Set aside to cool slightly.

3 Put the egg white, salt and sugar into a bowl, and whisk until the egg white has reached soft peaks. Add the egg yolk to the cooled melted chocolate and butter, and whisk well to combine.

4 Gently fold the whisked egg white into the egg yolk and chocolate mixture, then sift in the cocoa powder. Fold the cocoa powder through the mix gently until everything is well combined.

5 Pour the mix into the prepared tin and bake for 10 minutes, until set. Set aside to cool while making the mousse.

For the chocolate mousse:
1 Put the chopped chocolate and 160ml of the cream into a bowl set over a pan of simmering water and melt together, stirring regularly. Once melted, remove from the heat and set aside to cool slightly.

2 In a separate bowl, whisk the remaining 300ml of cream to soft peak.

3 Whisk the eggs into the chocolate one by one, ensuring each egg is fully incorporated before adding the next.

4 Beat one third of the softly whipped cream into the chocolate, whisking well to ensure it is fully combined – this will allow the rest of the cream to be incorporated more easily.

6 Once set, remove the cake from the tin before cutting into slices to serve.