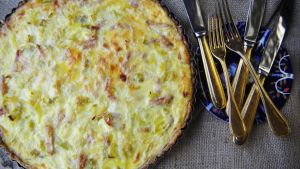 To make the pasty, place the flour and butter in a food processor and blitz till it’s like breadcrumbs before adding the egg and blitzing for few seconds until it forms dough. Wrap in clingfilm and chill for at least an hour. Then roll out onto your tart case (26-28cm approx will do) and bake it blind until just done. Meanwhile, in a large saucepan, sweat the leeks and onions in the olive oil until they’re soft. Decant into a large bowl and add the apple/pear, cheeses, cream, ham and egg yolks.

Mix well together, and season. Pour the mixture into the cooked pastry case and bake until golden and bubbling – about 30 minutes. To serve, sprinkle the chopped parsley on top.