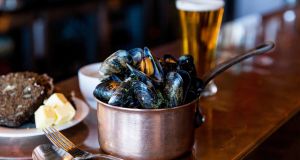 Local sourcing, innovation and value are the cornerstones of a new scheme designed to improve food in Irish pubs. Photograph: Emma Jervis

Fáilte Ireland and the Vintners Federation of Ireland (VFI) are joining forces to improve the range and quality of food on sale in Irish pubs. The “Grow your Food Reputation” training programme, launched in Kilkenny on Wednesday by Minister for State for Tourism, Brendan Griffin, aims to raise awareness among publicans of the potential benefits of serving good food.

Last year, visitors to Ireland brought in revenue of €6.5 billion, with almost a third of that, €2 billion, spent on food and drink. According the the VFI, more than 90 per cent of tourists visit a pub when in Ireland.

However, eating in a pub in Ireland can be a bit of a lottery. You can enjoy Michelin-starred food at Wild Honey Inn in Lisdoonvarna, the first pub in Ireland to achieve this accolade, and Morrissey’s of Doonbeg has a Bib Gourmand, in recognition of its “good quality at good value”. In all 30 pubs in Ireland – 22 in the Republic and eight in Northern Ireland – are included in the Michelin Eating Out in Pubs Guide 2018.

But, walk into some hostelries across the country, and your choice of sustenance could be limited to “Cheese and Onion or Salt and Vinegar?”. If you’re lucky, there may be a cellophane wrapped toastie ready to be grilled. And while this ham, cheese and tomato on white bread snack (red onion optional, Coleman’s English mustard obligatory) has a certain charm, it does not do much to reflect the strength of Ireland’s artisan food producers.

The Fáilte Ireland and VFI programme will encourage publicans to “re-imagine” their food menus, according to Sinead Hennessy, Food Tourism Officer with Fáilte Ireland.

“Grow your Food Reputation is about supporting pubs to provide food and drink experiences that focus on quality, freshness and place. It speaks to the growing opportunity to move away from long, laden menus towards a simple re-imagined signature food and drink offering with a local story behind it,” she says.

Hennessy mentions Deasy’s Harbour Bar, in Ring village, Clonakilty, where chef Caitlin Ruth serves an eclectic menu with influences from all over the world, as an example of an interesting pub menu “that does local extremely well”.

The initiative, which will involve pub owners in a series of 21 training days running at locations nationwide between September and December, places emphasis on “innovation, locally sourced produce and value for money”.

The fully subsidised one-day training programme was drawn up by Fáilte Ireland and the VFI, along with a panel of industry experts including food writer Aoife Carrigy and beer expert Susan Boyle.

Speaking at the launch in Kilkenny, the Minister acknowledged the high expectations held by tourists visiting Ireland: “We know that tourist and traveller expectations around food and drink are changing, with over half of all visitors indicating that food and drink is more important now than it was five years ago.”

Paul Keeley, director of commercial development at Fáilte Ireland, noted the contribution a positive food and drink experience can have in generating customer satisfaction and securing repeat visits.

He said that the training was designed to equip publicans with the skills to offer a superior food and drink experience: “The programme is designed to help publicans with practical advice and assistance on how to develop their food offering, including the benefits of sourcing local produce and the creation of a food ‘story’ as well as the know-how and tools to optimise profits whilst offering a high quality food and drink experience.”

Padraig Cribben, VFI chief executive, said: “Tourists visit our pubs for their unique atmosphere and character, and over the past decade they increasingly have come for the quality of food.”

Is calling redheads ‘gingers’ an insult or not?
3

‘I keep fantasising about a woman in work’
8

Fire your internal drill sergeant, it’s time to be kind to yourself
9

Moving abroad alone: ‘You wonder why you are leaving everyone who has ever loved you’
10