Pickle review: Oldschool is the new thing for Indian food

The Camden Street restaurant may look retro, but is a long way from 1990s McMadras 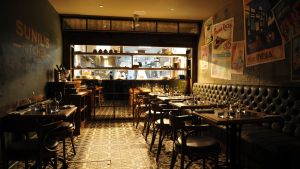 Goat on toast. It’s a first for me and I love it. Not least because it raises the whole goat-shaped mystery of Western menus. The goats’ cheese logs served in restaurants would probably circumnavigate the globe several times if you laid them end to chalky end. Yet where are all the kid goats whose demise gives us the goats’ milk to make all the cheese? The answer is that goat is a staple meat in developing countries, food for people who can’t afford to be picky about the ruminants they eat.

“Your mother’s going to be in a pickle this evening,” my husband tells one of our children as I’m heading out the door to Camden Street’s newest Indian restaurant. As jokes go it’s a nine on the groanometer, because Pickle is the name of the restaurant, see?

Pickle is something of a conjuring trick as it looks like it’s been here since analog times. The outside is painted 1970s green and the name in schoolbus yellow, complete with curlicues and flourishes. Sunil Ghai is the chef here. He came to Ireland to cook in Asheesh Dewan’s Jaipur restaurant group and gained widespread acclaim for Ananda in Dundrum. Now he’s arrived in Camden St with business partner Benny Jacob, taking over Surma restaurant. They’ve turned a white tablecloth place into a series of more casual rooms with a bar upstairs. It is a trip back to pickled and spiced roots.

The food here is the cooking of home and street cooks, a world away from the chicken madras and tikka masalas of mainstream curry houses. Dublin can claim a first in Indian restaurant culture as historian Michael Kennedy explained to me and Juliana Adelman for our radio series History on a Plate. The city was briefly home to the first 20th century Indian restaurant anywhere in the British isles when The Indian Restaurant and Tea Rooms opened in 1908 on Sackville St, beside what is now the Gresham Hotel. The venture was short-lived and it has taken a century for Indian food, as most Indians would know it, to truly arrive.

As Rasam restaurateur Nisheeth Tak told us, Dublin “Indian” restaurants in the 1990s had an identikit menu: tandoori chicken, shish kebab, samosa, onion bhaji. A single city-centre wholesaler sold all the spice mixes so everything tasted the same no matter where you ordered it. We’re not in McMadras country here and Juliana says she could eat a whole bowl of the prawn pickle which comes in a salt shaker sized kilner jar with the vegetable crisps (poppadoms as we would call them). There are puffy light as air rice ones, yellow ones made from cassava and my favourite, a crisp scroll of lentil poppadom. I’ve already scoffed an aloo tikki, potato cakes stuffed with lentils and dressed with three kinds of chutney, tangy brown tamarind, a green chutney and pomegranate seed flecked yoghurt. The dish is layered with comfort flavours so saturated with spice the pomegranate seeds and yoghurt have all the dousing effects of a leaky water pistol on a forest fire.

Given that fiery start I’m ready for serious heat from the goat curry but this is a much gentler dish. It arrives in a flat silver platter with a mound of raw shallot on the plate chopped so fine the pieces could pass through a sieve. Four airy cubes of house-made egg-enriched bread, a sort of Bengal Brioche provide the sweet toasts for the goat. The meat is tender and subtle, not too many fields away from mutton, kid meat, I’m guessing, rather than gamier billy goat gruff. But this is a stew so velvety and right Sunil Ghai could curry an old army boot and make it taste good.

Juliana gets the tawa machhi, a half sea bass served skin side up with the skin spiced and shallow fried to papery crispness. There’s a sweet delicate mound of crab chutney balanced on the top and the plate is dotted with pickled carrots and cauliflower chunks, both of which we would order and eat by the bowlful. A chana masala is the perfect chickpea curry.

There’s a creamy rose-drenched kulfi to finish with basil seeds like frogspawn spilled over it. Stranger but still delicious are the saffron-soaked noodles that lie in its creamy depths. A raspberry sorbet has fresh and dried raspberries and shards of good dark chocolate broken over its pinkness.

As curry eaters it’s taken us a while to get here, for something as oldschool as Pickle to be the new thing. But Pickle is lovely. It’s not retro. It’s fresh and vibrant. It’s a cook being true to his heart which is the way things always taste the best. Dinner for two with two glasses of wine, sparkling water and mint tea came to €102.

Don’t mind us: Jennifer O’Connell on the marvels of Hiberno-English
5

Paul Howard: Why I wrote story of Guinness heir Tara Browne, the man immortalised in a Beatles song
6

Lonely in lockdown? Get yourself a bottom-sniffer
7

‘The strutting farmer gripped my hand. I could smell alcohol on his breath’
9