This recipe from La Stampa is deliciously retro, as are all the dishes I’m cooking today 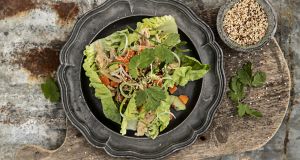 ‘I had eaten Bang Bang chicken at Marco Pierre White’s Canteen and loved it. So, too, did the people of Dublin.’

I used to be the head chef of a Dublin restaurant called La Stampa. This was in the early 1990s and it was a pretty rock’n’roll place at the time, with wall-to-wall celebs and giddy weekly reportage in the gossip columns.

It was a great place to work. It bustled with people, like the great Parisian brasseries do. There was always a frisson in the air, especially on the walk from the bar through the corridor that opened up into a room of breathtaking beauty. Bagging a Saturday night table there was like being given a golden ticket by Willie Wonka. Ireland was on the cusp of the mad years; things were on the up and people were flashing the cash.

Everybody was glamorous, the room befitted it. It was a million miles away from the staidness of the restaurant I had come from in Park Lane in London. Here, for the first time, I cooked what I wanted. I had to find my own way.

That restaurant taught me a lot of things, most importantly that a great restaurant is not all about the food. Front of house is every bit as important. The waiters were famously the highest tipped in Ireland and the managers ran the place like a Las Vegas show. I kept the food simple and tasty. I had to, we were doing 250 people a night. It was all about the infamous buzz and the happy punters clamoured to return.

I still have all my menus from La Stampa. One dish stands out. Bang bang chicken. I had eaten it at Marco Pierre White’s Canteen and loved it. So, too, did the people of Dublin. It’s deliciously retro, as are the other dishes I’m cooking today.

The prawn cocktail is super easy. You could cheat a bit and buy some decent hummus to replace the butterbean dip to make a snazzy little starter. The quiche is delicious. I’m using shop-bought shortcrust pastry but fire away if you want to make your own. I’ve added dark sherry and a few raisins into the onions to give it some robustness

Keanu Reeves – do his ‘hover hands’ mean he respects women?
10

‘Coming home to Ireland felt like a gamble. I felt safe in Korea’
Real news has value SUBSCRIBE