More than a blender? The cult of the Nutribullet

The so-called ‘superfood nutrition extractor’ has spawned a large community of devotees with its claims to break down food at the molecular level. But does it work? 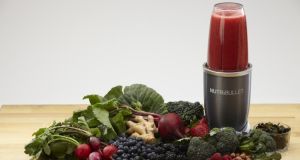 The detritus of daily life is recorded for posterity at the Victoria and Albert Museum in London. One of the world’s best-known and most highly respected public institutions, it has built on its reputation as a cataloguer of public life (an exploration of contemporary protest movements is a 10-second walk from a fashion exhibition of wedding dresses) with its new rapid-response collecting unit.

The unit aims to collect everyday objects of wider significance: strong elevator cables that enable skyscrapers to be built even higher, a pair of false eyelashes made under appalling conditions in Indonesia, the world’s first 3D printed gun.

It’s not entirely implausible to imagine the exhibition might one day house a blender. Not just any old functional blender but one that has spawned an online community that at times resembles a cult with its own doublespeak and buzzwords. A blender that reflects a growing international obsession with health and fitness. Some of your healthier friends already have one. You may have just received one as a Christmas gift. It is, of course, the Nutribullet.

Firstly, don’t call it a blender. Call it a “superfood nutrition extractor”. The Nutribullet claims to do what less powerful blenders cannot: break down food at the molecular level. The blades, which rotate at an impressive 10,000rpm under a powerful 600-watt motor, liquefy what other blenders cannot. The only popular blender (apologies: superfood nutrition extractor) that is more powerful is the Vitamix, which can blend an iPhone into dust with ease. At €600 this would seem like a reasonable expectation for a kitchen appliance.

The Nutribullet, which costs €130, attempts to counterbalance price quibbles with claims that it does many more things that cheaper, less efficient blenders do not. For the product’s mesmerising infomercial, David Wolfe, Nutribullet’s “longevity and nutrition expert” half shouts these claims to a reassuringly diverse range of men and women in primary- colour shirts, all clutching notepads.

“This machine is designed to break down the cell walls of your food, releasing, unleashing [he punches a fist through the air] nutrients inside, transforming fresh food into [dramatic slight pause, then another fist pump] superfoods.”

Cut to the audience. Its members are all nodding along, apparently amazed. One woman pantomime-mouths the word “Wow”, her mouth a gaping O of disbelief.

Wolfe isn’t done. He tests a Nutribullet against a regular blender, mixing the same ingredients in each one. The regular blender, of course, comes up short, leaving chunks of green leaves and flax seeds in a strainer.

The Nutribullet’s “Nutriblast”, an unnerving word for a substance that is supposed to ease the process of digestion, is totally liquefied. “When we pour it, we can see how glowing it is. It’s beautiful,” says Wolfe. Indeed, the liquid is glowing. Bright green.

Wolfe repeats his mantra several times throughout the infomercial: “This is not a blender.” But it is a blender. It mixes like a blender, it sounds just like a blender (only louder) and it looks like a cross between a blender and a small rocket. The claim that the Nutribullet has the master key to extra nutrients that our fruit and vegetables are concealing from us is controversial at best.

In August, America’s NBC News investigated the claims made for the Nutribullet. Marion Nestle, the Paulette Goddard professor at the department of food studies, nutrition and public health at New York University, told reporters there was a “theoretical possibility” the Nutribullet logic holds, but there was no real evidence to suggest that especially pulverised food was healthier than the food that was chewed before digestion. In this case, it’s the digestive enzymes in the body that are breaking food down to a molecular level. A blender can only process food, not change it fundamentally.

Despite this, the Nutribullet movement has spawned a committed following. Devotees are drinking the Kool-Aid, only this time it’s made from leafy veg, nuts, berries and a splash of almond milk. Recipes with such aspirational titles as Fountain of Youth and Fat-Burning Boost Blast are swapped online by Nutribullet fans. The hashtag #nutribullet turns up almost 200,000 results on Instagram, beating the Vitamix by a comfortable margin.

It’s not all bad. While the Nutribullet may not extend one’s life or convincingly blast fat, it is an ingenious bit of kit for health fanatics. It is small, easy to clean and a powerful blender for those who just want to liquidise food without expectations of creating biblical manna.

Due in no small part to its convenience (the Nutribullet operates with a cup and a series of easy-to-rinse, twist-on blades), it is ideal for those who want to introduce more fruit and vegetables into their daily diet without going to the bother of chewing – and who, we may ask, has time for that?