At Dough Bros, they’ve nailed the foundation on which their pizzas sit 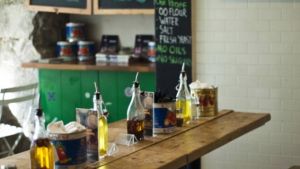 While in Galway recently for Food on the Edge, a two-day food symposium instigated by Michelin-starred chef JP McMahon, I dropped by The Dough Bros’ new pizzeria on Middle St.

Some say the Dough Bros’ story began when Eugene Greaney lost his sales and marketing job in 2013 but, according to the Bros’ website, it all began with a family trip to Naples in 1993 where Greaney fell in love with wood-fired pizza. In April 2013, he got his hands on a wood-fired oven from Italy and took his street food van out on the road. On the way home from the Dough Bros’ very first job, they crashed the van into a bridge, nearly squashing the dream before it had even been fully road-tested.

They persevered, got their hands on a new van and were back in business before the summer of 2013 was up. After a year of making an impression at food festivals around the country, they took the plunge when opportunity to pop up in a vacant space on Abbeygate Street came across their laps. It was well received and this September, Dough Bros went from pop-up to permanent, making the move to their home on Middle Street.

The decor is white butcher tiles and minimalist wooden benches. Their wood-fired oven, a beast of a furnace, makes eye contact with me as I walk through the door. “Ah, that’s class! So cool,” a couple of local kids fresh from football practice coo when they see the wood-fired oven and a dough machine.

Pizza from a van

The rules of Dough Bros are written proudly on the tiled wall, and they include leaving your formality at the door, turning off your phone (once you’ve tagged Dough Bros on your various platforms, of course), and respecting your elders. In pride of place is the shell of a Dough Bros’ street food truck. “When we told people we were going to sell pizza from a van they laughed,” reads a note on the wall next to the truck.

“But we knew this wasn’t going to be just any trailer. In our heads, our funky little street food truck was going to change the game!” It’s the kind of decor and messaging that casual dining chains try (and often fail) to emulate the world over, but The Dough Bros are the real deal.

Though the old favourites are on offer in the form of Margherita (€7.50) and Proper Ham & Mushroom (€9), I’ve taken the opportunity to indulge in one of Dough Bros’ specialty pizza, a Prawn Po’Boy (€11). What we’re talking about here are morsels of juicy prawn meat marinated in garlic and coriander, sitting alongside shavings of pickled daikon and a splattering of a deliciously piquant hot sauce, described on the menu as “burnt chilli emulsion”. Inventive toppings are appreciated but any goodwill created through creative pairings can be obliterated if the dough is no good.

At Dough Bros, they’ve nailed the foundation on which their pizzas sit. It’s a thin base, with a puffed, spongy and blackened crust, a testament to the magic created when a ball of dough meets a wood-fired oven.

It turns out I wasn’t the only Food on the Edge delegate to fuel my trip in the city of tribes with a slice from Dough Bros. Nathan Outlaw, Shane Hill and Claude Biso were among the Michelin-starred chefs who popped in for a pizza while in town for the symposium and told their collective hundreds of thousands of followers about this Galway pizzeria.

Bosi went so far as to say it was one of the best pizzas he’s had outside of Naples. Not bad for a couple of bros with a dream.