How to make a perfect stir-fry with practically any vegetables 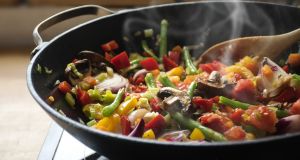 As vegetables start to soften and sag, they’re great in stir-fries. Photograph: iStock

It’s a shame to let precious vegetables go to waste, especially these days, when we’re all trying to limit trips to the supermarket. But the good news is that, as sturdy greens and other vegetables start to soften and sag, they’re perfect for stir-fries.

These aren’t conventional times, so what you need isn’t a recipe for a conventional stir-fry. Instead, you need one that helps you work with what you have, building texture with nuts, sturdy greens and crunchy vegetables.

This particular formula starts with almonds, toasted in oil, then salted. Next, celery, a long-lasting staple, provides substance and structure. Quick-cooking greens, like mature spinach, chard, mustard, cabbage and its many relatives (bok choy, kale, brussels sprouts, broccoli, cauliflower) or even pea shoots are added last, lowering the cook time for delicate greens, which wilt quickly, and steam with a splash of vinegar.

The rest is open to interpretation. Do you have ginger or garlic? Toss it in. Maybe you bought snap peas, mangetout or green beans on your last grocery run? They’ll be perfect. Slice them into thick matchsticks and toss them in. You’re down to a couple of shrivelled radishes? Slice and them in too.

Fresh herbs really take this dish to the next level. If you have a pot of mint or basil growing on your windowsill, or an about-to-wilt bunch of coriander in the fridge, throw in a generous handful.

Serve your stir-fry on a bed of fluffy rice, and douse at will with Sriracha – or your favourite chilli sauce – tamari (or soy), toasted sesame oil or all three.

Method
1. In a large wok or cast-iron pan, heat the oil over medium-high until shimmering. Add the almonds, season with salt and cook, tossing, until toasted and crisp, 3 to 4 minutes. Add the celery and crunchy vegetables and toss until slightly softened, 1 to 2 minutes.

2. Sprinkle with sesame seeds, if using, and toss until toasted, 1 to 2 minutes. Add the sturdy greens, toss until coated in oil, then add the vinegar, scraping the bottom of the wok to release any browned bits. Cover and cook until greens are lightly wilted, about 1 minute.

3. Season with sesame oil and salt to taste. Divide the rice among four bowls and spoon the stir-fry over the top. Scatter the herbs and drizzle with soy sauce and Sriracha, if using. – New York Times