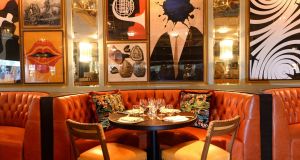 In Dublin’s Ivy Restaurant, the 12.5 per cent service charge has been used to part-pay contracted wages. Photograph: Dara Mac Donaill

They’re still at it. Some restaurant owners still keep the tips you give your waiter as a bonus for good service.

In the past year, The Irish Times, hospitality staff, unions, politicians and academics have helped expose the worst restaurant tipping practices. They include owners failing to properly distribute tips, pocketing credit card tips, and using service charges to pay basic wages or other costs.

And while many restaurants distribute staff’s tips fairly, there are multiple horror stories, which are still rolling in. Hospitality staff over the past month have described a trendy Dublin city centre restaurant where the owner takes €2 per diner from tips; in another high-end suburban eatery the owner and managers pocket 50 per cent of tips. In a top west of Ireland hotel, staff who left before the end of the year, with promises they’d receive a year’s owed tips, never got them.

NUI Galway business lecturer Deirdre Curran references a local survey showing a third of staff do not get correct tips. “Tips are going to [pay for] breakages, walkouts, management. Staff get a portion at best, not their fair share.”

And even in many of the restaurants where tips are distributed to staff, it is done by management, without explanation of how they are worked out.

The range of revelations have sparked outrage – and raised awareness – among diners who believed tips or service charges went to low-paid staff on top of wages. Agitation has built in recent months among community groups, unions and politicians.

However, it has also become clear that there is nothing illegal in even the extreme practices. People acknowledge it’s wrong, but there’s disagreement about how to right it.

The issue comes to a head of sorts this Wednesday when the Private Members’ National Minimum Wage (Protection of Employee Tips) Bill reaches final stage in the Seanad. Modelled on a successful law in Ontario, the Bill will either pass to the Dáil or be voted down.

The Bill was originally drafted in 2017, but referral to the Low Pay Commission delayed it for a year. The commission advised against legislating to ensure low-paid workers receive all their tips, concerned it could have “unintended consequences”, including a liability to tax, resulting in even lower take-home pay.

People concerned about workers’ rights argue it would improve the lot of low-paid staff. “The consequences already happening are unintended. I give a tip, I intend that tip to go to staff. I don’t intend it to go into the pocket of the employer,” says Fiona Dunne of One Galway and One Cork, grass roots alliances of community and voluntary groups, students and trade unions fighting for better working conditions.

Clem Shevlin of Siptu says: “Fear of unintended consequences forgets the current consequences, of people not being able to put bread on the table.”

Minister for Social Protection Regina Doherty opposes the legislation, and has spoken instead of a “collective agreement”, which her department clarified as an amendment to the Payment of Wages Act. It would “distinguish between tips, gratuities and service charges and place tips outside the scope of a person’s contractual wages”.

Doherty wants “broad agreement” on the issue and to this end has met “relevant stakeholders and industry bodies”. These stakeholders include the Restaurants Association of Ireland, Hotels Federation and the Vintners Federation – but she does not mention workers or non-industry stakeholders.

Following the publicity about tip retention, the Restaurants Association devised a notice for members to display: “All tips and gratuities are distributed to staff”. Crucially, it does not state they are distributed on top of wages – rendering the notice meaningless.

Employment lawyer Richard Grogan says the National Minimum Wage Act “effectively encourages restaurants to use tips, from customers, to pay staff”, as it says service charges, including tips, paid through payroll can be used in calculating minimum wage. “Some of those restaurants whose signs say tips go to staff may well do so but pay it through the payroll as part of their hourly rate of pay rather than in addition to their wages”.

The tips Bill has had cross-party Seanad support; this week it’s expected Doherty will instruct Fine Gael Senators to vote against it. “We need Fianna Fáil’s votes to pass it,” says Senator Paul Gavan, who is sponsoring the Bill. “If Fianna Fáil Senators turn up on Wednesday and vote for the Bill it will pass to the Dáil.” It could conceivably pass two stages before the summer recess, and be law by Halloween, he says.

Fianna Fáil has facilitated the Bill through the Seanad, and depending on amendments, a spokesman says, will continue to engage with and support it, including in the Dáil.

But the Minister’s preferred approach is to put a code in legislation, “to be potentially subject to the Workplace Relations Commission (WRC) inspection regime”. The commission says 67 per cent of food and drinks outlets breach basic employment law.

Critics of this strategy say the WRC has few teeth – or resources – to act on infringements.

Gavan insists the legislation is necessary . He predicts that even if this Bill fails, the issue will not go away. “It’s building a head of steam. If legislation doesn’t happen now it will at some stage. This is the only opportunity within this Dáil term to deal with this issue.”

Grogan says: “Many working in restaurants are vulnerable part-time employees who rely on low-paid jobs to make ends meet,” and are potentially subject to manipulation and exploitation.

He says retention of tips is “a cynical exercise”. “Just because it’s possible to do so under the law does not make it morally right.”