Donegal Table, a collection of recipes for ‘delicious everyday cooking’ won the award for the best cookbook written by a restaurant chef at the Gourmand World Cookbook Awards 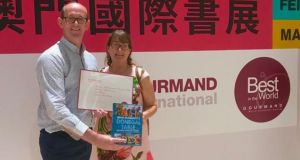 Brian McDermott and his wife Brenda at the Gourmand World Cookbook Awards in Macau, China

Chef and hotelier Brian McDermott’s Donegal Table has won an award at the Gourmand World Cookbook Awards in Macao, China.

In the best cookery book written by a restaurant chef category, McDermott’s collection of recipes triumphed over eight other finalists, including Mirazur, written by Argentinian chef Mauro Colagreco, about his restaurant of the same name in the South of France. Mirazur, which has three Michelin stars, was recently voted number one in the World’s 50 Best Restaurants rankings.

McDermott is the proprietor of the Foyle Hotel & Bistro in Moville, Co Donegal. His book Donegal Table: Delicious Everyday Cooking, is published by O’Brien Press.

The Gourmand World Cookbook Awards, which recognise excellence in food writing across multiple categories, were presented at the Macao International Book Fair.

“As a chef, all my inspiration comes from Donegal, from its traditions, its produce, and its people, and this award is above all a testament to them,” McDermott said.