Hey Pesto, not so healthy after all?

Pesto sauces contain far too much salt, study finds. Go for fresh, and check the labels 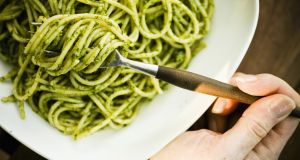 For many, life may be too short to make pesto from scratch, especially with so many good pestos easily available. But new research shows some commercially made pestos have exceptionally high salt levels. Today’s headlines roar about pesto sauces that are “saltier than seawater” or with “twice as much salt as peanuts”, or “more salt than McDonald’s burger”.

The key word here is “some”.

Research just published by UK campaigning group Consensus Action on Salt and Health (Cash), finds salt levels in pesto sauces on sale in supermarkets remain higher than suggested limits and have increased in some cases, despite campaigns to reduce them.

Two products made by Sacla, one of the bestselling pesto brands, have 30 per cent more salt than seawater and 2½ times as much salt per 100g as peanuts, says Cash.

Sacla’s No 1 Classic Basil Pesto has 18 per cent more salt than when it was last surveyed in 2009, while its No 5 Organic Basil Pesto has 32 per cent more than previously. Both contain more than 1.5g of salt per serving, more than a McDonald’s hamburger, and 3.3g of salt per 100g. For pesto and other thick sauces, the average salt target in the UK is 1.38g per 100g, but nearly 40% of products Cash looked at in the UK exceed this.

The recommended dietary allowance is 1.6g/70mmol sodium (4g salt) per day for adults. More than 90 per cent of the sodium in the diet is in the form of sodium chloride (salt); 1g of sodium is equivalent to 2.54g of salt.

Cash is calling on the UK to get tougher on the food industry as it may not meet targets for salt reduction. It analysed nutritional data for 75 pesto sauces on sale in major supermarkets in June and July. Among the other brands, Napolina Green Pesto with Basil, Gino D’Acampo Pesto alla Genovese Basil Pesto and Truly Italian Genovese Basil Pesto contained between 2g and 2.5g of salt per 100g.

Pesto pasta is popular with children, so a higher salt pesto sauce can raise their daily salt intake, which is much lower for children than adults. In the long term, consuming more than is recommended could increase a child’s risk of developing high blood pressure, strokes and heart attacks later in life.

Maximum daily recommended amount of salt for children is 2g for one to three-year-olds, 3g for four to six-year-olds and 5g for seven to 10-year-olds. Adults should eat no more than 6g of salt per day.

A quick look at the various pestos available in Irish supermarkets shows a wide variety in the salt levels. Fresh pesto in tubs, displayed in fridges, in general has a lower salt level than pestos in jars. But many brands have well over the suggested target of less than 1.38g salt per 100g in pestos.

If you’re not using excessive amounts per portion, the salt level may not be as bad as you think

Some of the pestos in Irish shops with lower salt levels include fresh tubs of Love Olive Basil Pesto with 0.7g salt, and Happy Pear Lovely Basil Pesto, which has 1g salt per 100g. The widely available Sacla hit the high notes, in a bad way, with 3.3g per 100g in their classic and organic jars or pasta, though its Reduced Fat Green Pesto has 1.2g salt.

Irish dietician Paula Mee says that more important than looking at the grams per 100g of salt, is working out how much pesto each person is eating per portion. If you’re not using excessive amounts per portion, the salt level may not be as bad as you think, she says. Fresh pesto is generally a better option.

She also says people should keep an eye on the levels of salt in condiments generally, and be moderate in the amount of high salt condiments – such as soy sauce and fish sauce – used in cooking. (See table.) Key to balance and moderation is to try to raise the levels of potassium compared to sodium in a dish – and using lots of fresh vegetables, high in potassium and minerals, will reduce the negative impact of salt in a dish by balancing out the sodium.

While we think of Italian and Mediterranean diets as healthy, she says, the modern Italian diet is not as healthful as the traditional Italian diet, which had lots of fresh vegetables, fish, chicken and cheese, and less meat, especially cured meat, than contemporary Italian diets.

And if you want to be sure to keep the salt levels low in pasta, you can always make your own.

This is a simple dish that can easily be made with regular shop-bought pesto but comes alive with the home-made version. It makes quite a lot of pesto but I’m of the opinion that if you’re going to go to the trouble, you may as well make enough to use over pasta or spread on toast.

The trained GP who can’t work in Ireland, despite the shortage
10