Give Me Five: Rosti with black pudding and apple 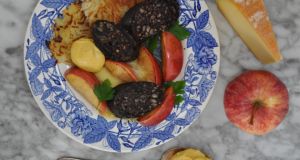 One of the main observations I’ve made over the past few months of creating these recipes with five ingredients is that the ingredients need to be of great quality. So it’s about choosing quality over quantity. I also seem to be using more whole foods.

This recipe is the perfect example. A feast is created using only five simple ingredients. It is cooking and eating in it’s purest form.

I love getting feedback on these recipes and hearing how readers take the basic recipe idea and make it their own, be it adding Parmesan or a handful of pinenuts to the avocado pasta dish featured a few weeks ago, or adding extra vegetables or herbs.

It’s all about getting to know the versatility of the ingredients and keeping cooking easy and enjoyable, with tasty nutritious results. We’re all busy and we all get hungry, but having a few super recipes at hand makes eating well much easier.

I love pairing fruit with savoury dishes. Hugh Fearnley-Whittingstall’s new series on Channel 4, River Cottage to the Core, has further motivated my fruit-themed cooking. He makes pizzas with pear and blue cheese toppings, and apple and mature Cheddar topping. Simple but delicious.

Cheese and fruit are perfect partners, whether as part of a cheeseboard, where a vine of grapes is draped over a selection of cheeses; or a plum or apple chutney gracing a ploughman’s platter with a good Cheddar and some salty, clove-scented homecooked ham.

This week’s recipe is a real treat. It involves buttery wedges of apple, black pudding and Raclette melted over crispy potato rosti.

Ireland has plenty of fantastic black pudding producers. Try and find a really nice artisan pudding. Sneem in Kerry is a great source of beautiful pudding. Various butchers have square slabs of barley-studded blood cake on their counters. It’s often made in-house and is surprisingly cheap, with each producer having their own blend of spices and secret ingredients.

A crisp red eating apple is ideal for this. Cooked briefly in the butter, its texture softens quickly and that fruity apple cider flavour comes out.

Rosti is a fantastic way of cooking potatoes. I’ve chosen Raclette cheese to further compliment the Swiss rosti. Raclette is a semi-firm cow’s-milk cheese with legendary melting qualities. It is usually served with pickles, charcuterie and baby potatoes.

When I was last in Switzerland, we went for a big hike up a mountain before returning starving and freezing and in need of crispy, hot potato. I got a huge, plate-sized rosti covered in melted cheese, and served with schnapps. It was the most cheese I’ve ever eaten, and the most schnapps I’ve drunk during daylight hours. It was one of those memorable meals, incredibly simple but beautifully done.

Grate the potatoes roughly, sprinkle with a little salt and leave to sit in a colander over the sink so any excess moisture drains away. Or else you can place the potato in a clean tea towel and twist it until all of the excess moisture is gone.

Melt a teaspoon of butter and a tablespoon of oil in a pan over a medium heat and add large tablespoons of the grated potato in neat bundles. You can gently press the potato down with the back of the spoon to make it more compact. Season with salt and pepper. Cover loosely with foil and leave to cook gently until the potato becomes crispy. Flip it over to cook the other side until golden. Keep it warm in the oven while you cook the remaining rosti.

Cut the black pudding into thick slices and fry in a little oil. Once cooked, place in the oven to keep warm. Melt a little butter in the pan and briefly fry the apple wedges over a medium heat. They should become golden and brown around the edges, thanks to the butter.

To serve, place a rosti on an oven-proof plate with the pudding and apple wedges. Place some thick slices of Raclette over the apple or rosti. Melt under a hot grill and serve immediately with a dollop of Dijon mustard.

Every Thursday we’ll tweet the five ingredients from @lillyhiggins and @irishtimeslife so you can have them ready for Friday. Email givemefive@irishtimes.com with your suggestions for recipes

We can hear our neighbours through the walls, what can we do?
5

Rock’n’wool: Irish knits come in from the cold
Real news has value SUBSCRIBE