Give Me Five: Coconut chicken

This soothing, mild-flavoured dish is a family favourite 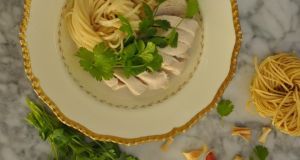 ‘A great way to introduce Asian flavours to children’

I rarely buy chicken breasts as I find them so dry and lacking in flavour compared with the brown meat of the legs or thighs. I think you need to really cook this cut in a special way: slow and gentle is the chosen method in this week’s recipe.

My coconut chicken is a family favourite. It is a great way to introduce Asian flavours to my small kids. Each time I make it a little differently, adding a splash of fish sauce or some chilli, introducing new tastes to them to slurp with the noodles from their bowls.

This is a soothing, mild-flavoured dish and a great way to gently cook chicken. The creamy coconut lends a sweetness, and the lemongrass a slight citrus flavour. The coriander adds a burst of freshness. I like to keep the coriander in long strands for this dish. It wilts in the warm coconut milk and becomes entangled in the noodles. It becomes more like a green vegetable than a herb, and is not just there for garnish.

Cooking the meat this way ensures that the coconut milk becomes a rich chicken-flavoured broth and the chicken stays nice and tender. Plunging the meat into a pot of bubbling hot coconut milk, on the other hand, would toughen it up and prevent it from releasing flavour.

This dish is lovely as it is – pure comfort food – but feel free to put your own twist on it. Add star anise or a few slices of red chilli to spice it up. A few fresh slices of ginger or dried lime leaves can also build a more complex flavour. You could also add a teaspoon or two of Thai curry paste and serve with a wedge of lime. It’s extremely versatile and can be whipped up in less than half an hour once there are noodles and a few tins of coconut milk in the cupboard and chicken in the freezer.

I usually buy my chicken at a nearby farmer’s market. It is organic and is sold frozen in trays of breasts, thigh and leg, or full birds. It’s very handy to have a few different trays in the freezer, especially near the end of the week when food shopping is low on my list of priorities. I want to be able to rustle up a tasty dinner fast and with minimum fuss, so planning ahead and defrosting some chicken the night before is always a good idea.

I love the texture of egg noodles with this, but rice is a good substitute. I have even added chunks of cooked sweet potato and green beans to this dish before to make it a more substantial stew. I usually cut the chicken into thick slices, but it could also be shredded with two forks and folded through the noodles.

Use full-fat coconut milk. This would be miserable with a thin, watery coconut milk. The amount required is 600ml: that’s 1½ tins, but you can freeze the remaining 200ml. I often add it to curries, soups or use it straight from frozen in smoothies. You can use the full 800ml if you want, but there will be quite a bit of extra broth left over, and it might dilute the taste.

Coconut milk often curdles when cooked at too high a temperature and too fast. To avoid this don’t boil it but rather bring to a gentle simmer; stirring can also prevent the fats and proteins from binding. If the worst happens, there’s no need to cry over curdled coconut milk; just remove from the heat and slowly stir. The clumps gradually separate and a smoother texture should return.

Shake the coconut milk tins well. Open and pour into a saucepan over a medium heat. Add the chicken breasts, lemongrass and a few sprigs of coriander. Bring to a simmer, then leave to bubble for five minutes. Put the lid on and turn off the heat. Let the chicken cook gently in the remaining heat for 20 minutes.

Meanwhile cook the noodles. Immerse the nests in plenty of boiling water for five minutes until just cooked. Drain in a sieve. Remove the coriander and lemongrass from the coconut milk. Cut each chicken breast into slices and place in four bowls. Distribute the noodles between the bowls and ladle the hot coconut milk on top with a generous amount of coriander.

Every Thursday we’ll tweet the five ingredients from @irishtimeslife so you can have them ready for Friday. Email givemefive@irishtimes.com with your suggestions for recipes

Marie Cassidy: ‘People think they know me because I’ve a bit part on a TV show called the news’
5

Lucky pup: How to dress up your dog this Christmas
8